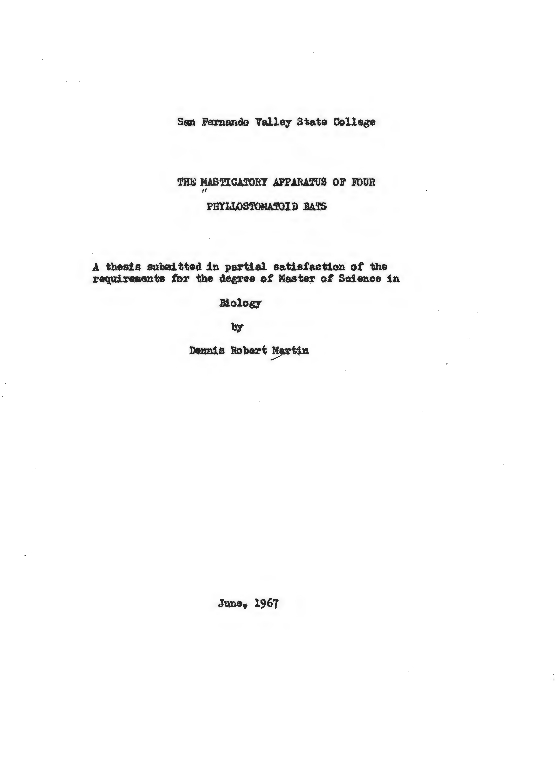 Creatore:
Martin, Dennis, Robert
Descrizione:
The functional and developmental relationship of the muscles, skull and dentition involved in mastication and feeding in four phyllostomatoid bats were studied. Dry weights of the muscles, weights of the mandibles, and skull measurements were taken. The distribution of dense bone and the development of supportive create suggested major areas of stress arising from the masticatory musculature. Using the variations pf these factors as criteria the four species of bats were classified into three categories of skull type; the breviarcuate, longoarcuate, and pkanoarcuate. The breviarcuate and longoarcuate types of skulls are adaptations to a highly specialized diet as seen in Artibeus and Desmodus. The planoarcuate type is associated with the primative insectivorous diet in Macrotus and with the reduction of the masticatory apparatus due to the increase in importance of another mechanism in Leptonycteris, a necter-eating bat. The mandible and masseteric muscle weights in all four bats suggest a relationship correlated with the lifting function of the muscles compared with the weight of the mandible. The close correlation found between the weight of the pterygoid muscles and the zygomaticomandibular muscle, along with the structure of the jaw aarticulation, suggested lateral motion as an important function of these muscles in Macrotus and Artibeus. In Leptonycteris the zygomaticomandibular muscle are greatly reduced compared with pterygooid muscles. The mechanical efficiency of the mandible as a class III lever was found to be high in Macrotus and Artibeus, corresponding to well-developed masticatory musculature, as opposed to Leptoncteris with low efficiency and reduced musculature. The efficiency of the apparatus in Desmodus, unlike Artibeus and Macrotus, is due to orientation of the temporalis. It is suggested by the articulation, muscle size and orientation, and the dentition that the action of the mandible in Deamodus is significantly flexible in moving anteriorly. Correlated with observations of the biting action of the vampire a possible function is discussed. Hypothetical pathways in the evolution of theses bats from an early primitive insectivorous type are presented.
Resource Type:
Thesis
Campus Tesim:
Northridge
Department:
Biology