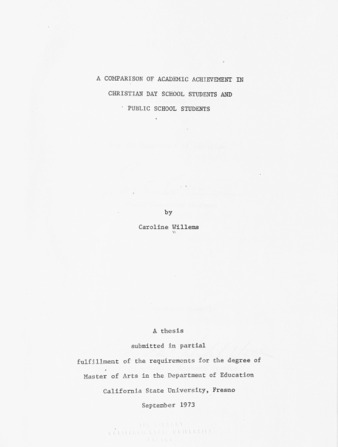 Creatore:
Willems, Caroline.
Descrizione:
During the years until World War II public school education retained many of the moral and spiritual teachings which were found in the earlier private schools. There was much leniency toward prayer and Bible reading in the classroom, as well as toward released time for religious education.^ Although such views were favorable toward Christian teaching, there were still several religious groups who felt that education with a special emphasis on Christian doctrines, values and practices was desirable. The Roman Catholic church has consistently attempted to establish private elementary and secondary schools within the framework of their faith. They have been signally successful until very recent years. The Lutheran church has been one of the few out-standing examples of Protestant denominations which have maintained their own schools.
Resource Type:
Masters Thesis
Campus Tesim:
Fresno
Department:
Education