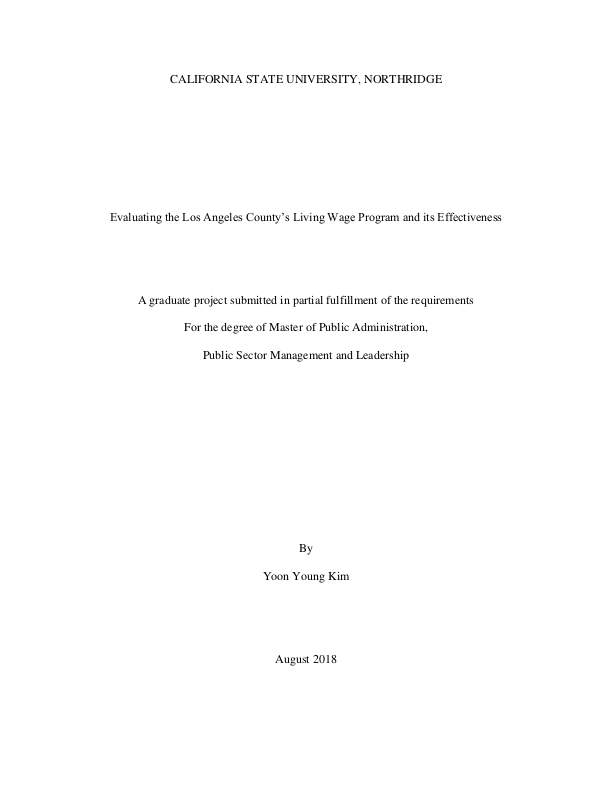 Creatore:
Kim, Yoon Young
Descrizione:
The Los Angeles County approved the Living Wage Ordinance in 1999, and revised the policy in 2015 to require all contractors working on County funded projects pay their employees a minimum $15 an hour by January 1, 2018. The argument for such living wage measures is that paying a “living wage” allows contractor employees to provide for themselves without relying on government for sustenance. Proponents of living wage ordinances argue further that forcing contractors to pay its employees high wages is good for the local economy, as it boosts the spending power of the working class. This Project’s review of literature available on precedents of living wage ordinances in minimum wage movements, as well as political and economic impact of living wage campaigns throughout the U.S. reveal mixed results; while the consensus among the early studies was that such redistributive policies are not effective, harming the economy by increasing unemployment rates, equally as many number of studies have implicated that living wage policies are neither harmful nor much beneficial to the overall economy, while on the contrary, some studies have concluded that living wage laws increased employment rates and helped the economy overall. In addition to the review of past and current literature, the author will evaluate the effectiveness of the County’s Living Wage Program by extensive review of select participants. Author will use extensive interview questions and review the qualitative data from such questions against quantitative data available on County’s Living Wage Program to determine whether the Living Wage Program has been effective in accomplishing its goal of reducing the amount of County residents resorting to various County social and health services.
Resource Type:
Thesis
Campus Tesim:
Northridge
Department:
Public Administration