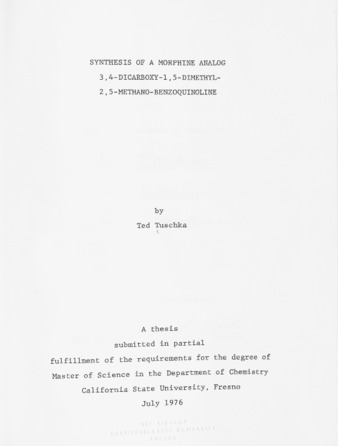 1. Synthesis of a morphine analog 3,4-dicarboxy-1,5-dimethyl-2,5-methano-benzoquinoline.

Creatore:
Tuschka, Ted.
Descrizione:
Grewe' s synthesis of the morphine ring system has been applied by May to the synthesis of benzomorphan (2,3). In his scheme the diene which resulted from the treatment of a pyridinium salt with a Grignard reagent was catalyti- cally hyarogenated, leaving a single double bond. Subse- quent ring closure formed benzomorphan. It was the purpose of this research to react the diene intermediate of May's in a Diels Alder cycloaddition. The resulting adduct was then reacted in a Friedel Crafts addition to the aromatic center by analogy to May's scheme. This ring closure could be accomplished only by treatment with 48% hydrogen bromide; the other methods described by May (4) caused a cyclorever- sion of the Diels Alder adduct. The resulting carbon skeleton will hopefully be the source of an analgesic similar to morphine.
Resource Type:
Masters Thesis
Campus Tesim:
Fresno
Department:
Chemistry