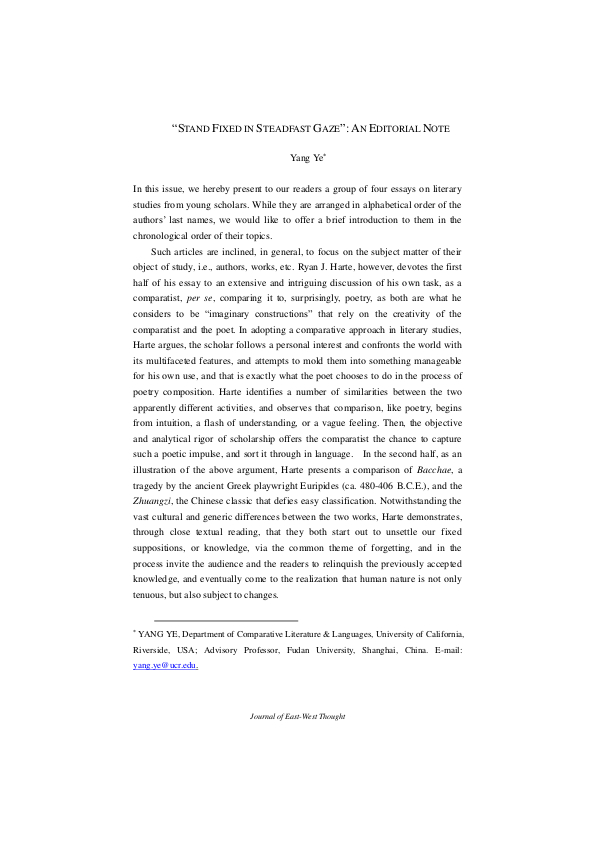 In this issue, we hereby present to our readers a group of four essays on literary studies from young scholars. While they are arranged in alphabetical order of the authors’ last names, we would like to offer a brief introduction to them in the chronological order of their topics. Such articles are inclined, in general, to focus on the subject matter of their object of study, i.e., authors, works, etc. Ryan J. Harte, however, devotes the first half of his essay to an extensive and intriguing discussion of his own task, as a comparatist, per se, comparing it to, surprisingly, poetry, as both are what he considers to be “imaginary constructions” that rely on the creativity of the comparatist and the poet. In adopting a comparative approach in literary studies, Harte argues, the scholar follows a personal interest and confronts the world with its multifaceted features, and attempts to mold them into something manageable for his own use, and that is exactly what the poet chooses to do in the process of poetry composition. Harte identifies a number of similarities between the two apparently different activities, and observes that comparison, like poetry, begins from intuition, a flash of understanding, or a vague feeling. Then, the objective and analytical rigor of scholarship offers the comparatist the chance to capture such a poetic impulse, and sort it through in language. In the second half, as an illustration of the above argument, Harte presents a comparison of Bacchae, a tragedy by the ancient Greek playwright Euripides (ca. 480-406 B.C.E.), and the Zhuangzi, the Chinese classic that defies easy classification. Notwithstanding the vast cultural and generic differences between the two works, Harte demonstrates, through close textual reading, that they both start out to unsettle our fixed suppositions, or knowledge, via the common theme of forgetting, and in the process invite the audience and the readers to relinquish the previously accepted knowledge, and eventually come to the realization that human nature is not only tenuous, but also subject to changes.