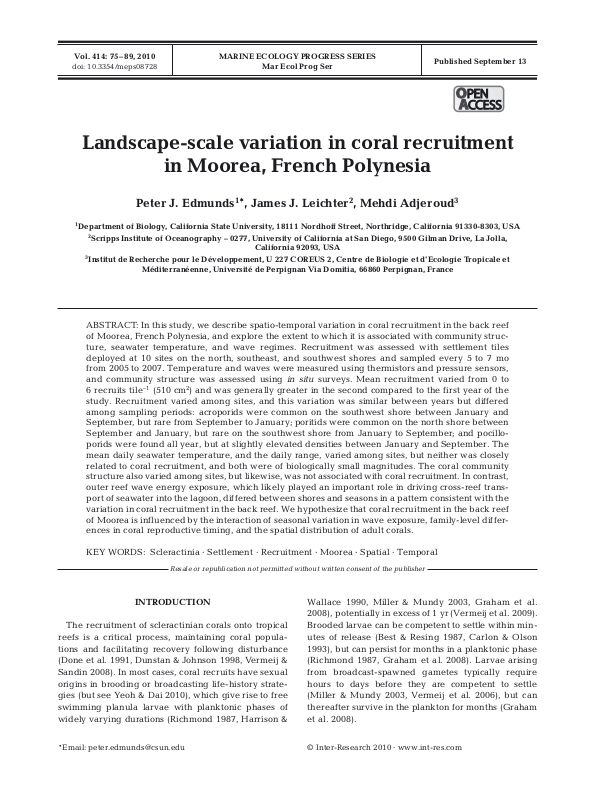 In this study, we describe spatio-temporal variation in coral recruitment in the back reef of Moorea, French Polynesia, and explore the extent to which it is associated with community structure, seawater temperature, and wave regimes. Recruitment was assessed with settlement tiles deployed at 10 sites on the north, southeast, and southwest shores and sampled every 5 to 7 mo from 2005 to 2007. Temperature and waves were measured using thermistors and pressure sensors, and community structure was assessed using in situ surveys. Mean recruitment varied from 0 to 6 recruits tile–1 (510 cm2) and was generally greater in the second compared to the first year of the study. Recruitment varied among sites, and this variation was similar between years but differed among sampling periods: acroporids were common on the southwest shore between January and September, but rare from September to January; poritids were common on the north shore between September and January, but rare on the southwest shore from January to September; and pocilloporids were found all year, but at slightly elevated densities between January and September. The mean daily seawater temperature, and the daily range, varied among sites, but neither was closely related to coral recruitment, and both were of biologically small magnitudes. The coral community structure also varied among sites, but likewise, was not associated with coral recruitment. In contrast, outer reef wave energy exposure, which likely played an important role in driving cross-reef transport of seawater into the lagoon, differed between shores and seasons in a pattern consistent with the variation in coral recruitment in the back reef. We hypothesize that coral recruitment in the back reef of Moorea is influenced by the interaction of seasonal variation in wave exposure, family-level differences in coral reproductive timing, and the spatial distribution of adult corals.