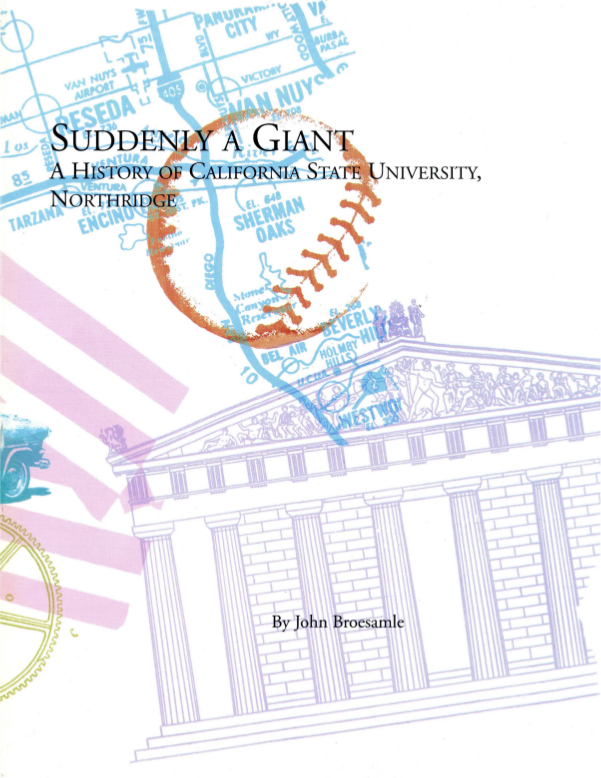 Suddenly a giant: A history of California State University, Northridge

Introduction: If by European standards all American universities are young, then California State University, Northridge is still in its infancy. Yet by the time it reached its third decade of formal existence in 1988, the university had already become a giant, one of the largest campuses in the United States. With 30,000 enrolled, its population equals that of a small city. It has more than a hundred thousand graduates, many of whom have distinguished themselves. One of the university's architects was the great Richard Neutra. CSUN can boast acclaimed programs in fields as far-flung as Journalism, Accounting, Geography, Music, and Communicative Disorders (speech pathology). Its National Center on Deafness has achieved fame throughout the country. And six of its administrators have gone on to become the presidents of other universities. In numerous ways California State University, Northridge has become an immense success. Yet many of its achievements have been matched by frustrations and failures. It remains a campus whose national reputation, and even whose self-identity, have yet to solidify. Symbolically, the campus is known by different names-"CSUN," "Cal State Northridge," and plain "Northridge." (These terms will appear interchangeably in this book.) In 1988 the university commissioned a history of itself. It wanted a real history-not the common sort of commemorative coffee table book. When my name was mentioned as a possible author, I found myself resisting. Thirty years is no more than a blink in time. I had spent the prior decade and a half studying mass political behavior from the 1880s to the 1980s, a subject far removed from the story of CSUN. And the proposal involved completing a book in just four years; my prior record was nine. I agreed to take on the task for a number of reasons. The idea of commissioning a frank and honest self-history seemed a refreshingly courageous one. The Northridge story clearly contained a good deal of drama-more, it turned out, than I first realized. Then too, the university was in a sort of pause that had gone on for some years, but which was quickly coming to an end. The founding faculty had begun to retire. An explosion of new construction would soon transform the face of the campus forever. A new campus in Ventura moved haltingly into being as a branch of CSUN, just as Northridge had emerged from Cal State Los Angeles (then Los Angeles State) three decades earlier. Unforeseeable at the time I began the book, early in the 1990s practically the entire upper administration of CSUN changed; nothing rivaling this had occurred since the late 1960s. As it turned out, the thirty-year mark proved an ideal time to reflect on the course we had pursued, a dividing line between eras.