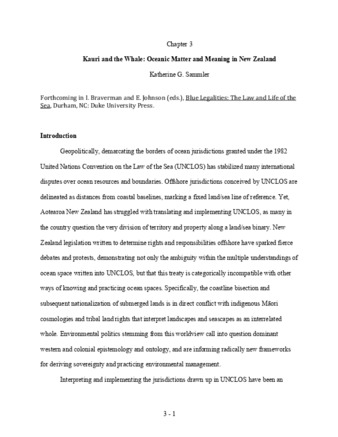 Kauri and the Whale: Oceanic Matter and Meaning in New Zealand

Aotearoa New Zealand has taken the lead in constructing legislative frameworks for governing emerging activities within the offshore territories granted under the UN Law of the Sea treaty. Passing the Foreshore and Seabed Act in 2004, the government claimed all submerged lands and associated resources as property of the Crown. This controversial law become a focal point for friction between two clashing worldviews: one embracing a western land/sea binary; the other based in indigenous Māori cosmologies, which do not recognize this division, but believe in customary rights from mountains to sea. Māori discourses of cosmology understand land and sea, human and more-than-human as coproduced and emerging relationally. This is demonstrated by the Māori origin accounts of whales and kauri trees, where the tree taught the whale his songs and the whale gave the kauri his oily skin as protection from the corrosive ocean. The ontological rift exposed by the Foreshore and Seabed Act fractured New Zealand society. In the midst of ambitions towards seabed mineral development, it forced reorderings of the ambiguous and unique legal seascape of English customary law, historical possession, and the Treaty of Waitangi. Complicated by delimiting a shifting coastline, it also codifies distinction between resource use, recreation, and navigation on and in the subsoil, water column, and airspace above. While eventually this Act was repealed, struggles nonetheless continue over the status of ocean spaces and resources. Indigenous and transnationalist movements offer an alternative way of governing that extends beyond the essentialism of national sovereignty, imagining and organizing ocean space in ways that offer “a profound alternative to the human presumption of sovereignty over the natural world” (New Zealand Parliament, 2014a). This chapter will engage such alternative ontologies and environmental activism in the sea to suggest new possibilities for imagining and managing offshore spaces, seabed resources, and oceanic life.