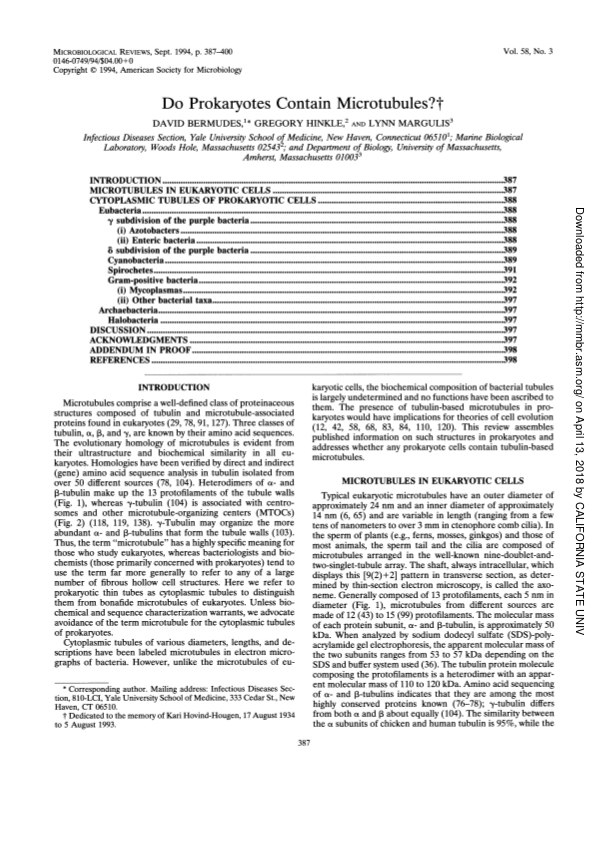 In eukaryotic cells, microtubules are 24-nm-diameter tubular structures composed of a class of conserved proteins called tubulin. They are involved in numerous cell functions including ciliary motility, nerve cell elongation, pigment migration, centrosome formation, and chromosome movement. Although cytoplasmic tubules and fibers have been observed in bacteria, some with diameters similar to those of eukaryotes, no homologies to eukaryotic microtubules have been established. Certain groups of bacteria including azotobacters, cyanobacteria, enteric bacteria, and spirochetes have been frequently observed to possess microtubule-like structures, and others, including archaebacteria, have been shown to be sensitive to drugs that inhibit the polymerization of microtubules. Although little biochemical or molecular biological information is available, the differences observed among these prokaryotic structures suggest that their composition generally differs among themselves as well as from that of eukaryotes. We review the distribution of cytoplasmic tubules in prokaryotes, even though, in all cases, their functions remain unknown. At least some tend to occur in cells that are large, elongate, and motile, suggesting that they may be involved in cytoskeletal functions, intracellular motility, or transport activities comparable to those performed by eukaryotic microtubules. In Escherichia coli, the FtsZ protein is associated with the formation of a ring in the division zone between the newly forming offspring cells. Like tubulin, FtsZ is a GTPase and shares with tubulin a 7-amino-acid motif, making it a promising candidate in which to seek the origin of tubulins.