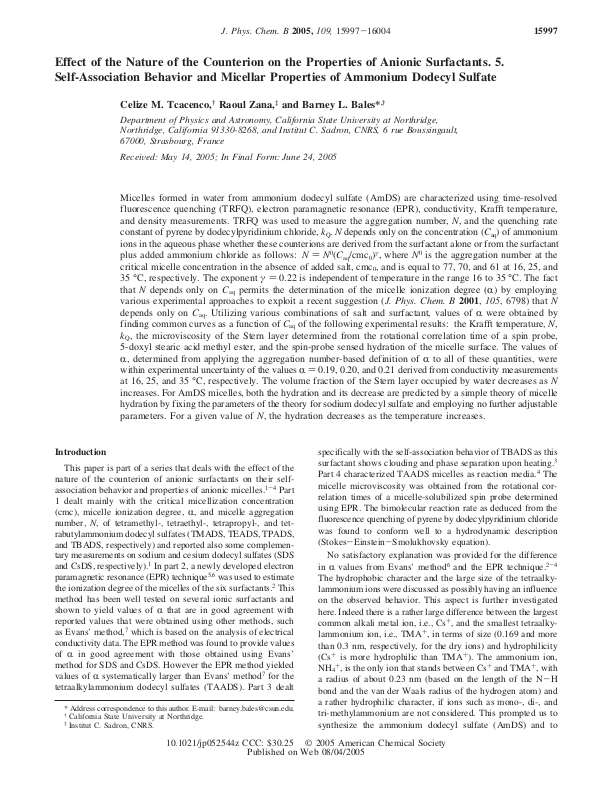 Effect of the Nature of the Counterion on the Properties of Anionic Surfactants. 5. Self-Association Behavior and Micellar Properties of Ammonium Dodecyl Sulfate

Micelles formed in water from ammonium dodecyl sulfate (AmDS) are characterized using time-resolved fluorescence quenching (TRFQ), electron paramagnetic resonance (EPR), conductivity, Krafft temperature, and density measurements. TRFQ was used to measure the aggregation number, N, and the quenching rate constant of pyrene by dodecylpyridinium chloride, kQ. N depends only on the concentration (Caq) of ammonium ions in the aqueous phase whether these counterions are derived from the surfactant alone or from the surfactant plus added ammonium chloride as follows: N ) N0 (Caq/cmc0)γ, where N0 is the aggregation number at the critical micelle concentration in the absence of added salt, cmc0, and is equal to 77, 70, and 61 at 16, 25, and 35 °C, respectively. The exponent γ ) 0.22 is independent of temperature in the range 16 to 35 °C. The fact that N depends only on Caq permits the determination of the micelle ionization degree (R) by employing various experimental approaches to exploit a recent suggestion (J. Phys. Chem. B 2001, 105, 6798) that N depends only on Caq. Utilizing various combinations of salt and surfactant, values of R were obtained by finding common curves as a function of Caq of the following experimental results: the Krafft temperature, N, kQ, the microviscosity of the Stern layer determined from the rotational correlation time of a spin probe, 5-doxyl stearic acid methyl ester, and the spin-probe sensed hydration of the micelle surface. The values of R, determined from applying the aggregation number-based definition of R to all of these quantities, were within experimental uncertainty of the values R ) 0.19, 0.20, and 0.21 derived from conductivity measurements at 16, 25, and 35 °C, respectively. The volume fraction of the Stern layer occupied by water decreases as N increases. For AmDS micelles, both the hydration and its decrease are predicted by a simple theory of micelle hydration by fixing the parameters of the theory for sodium dodecyl sulfate and employing no further adjustable parameters. For a given value of N, the hydration decreases as the temperature increases.