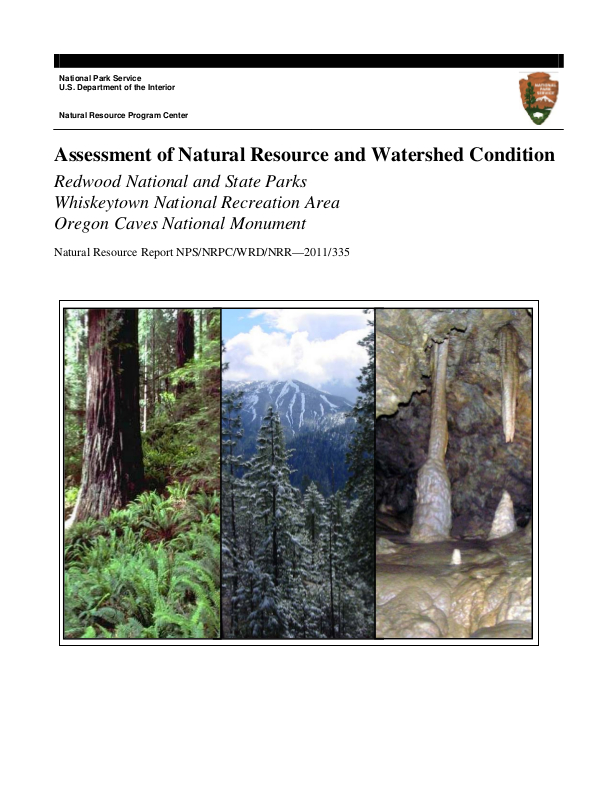 An ecological assessment of natural resource conditions in and adjacent to Redwood National and State Parks, Whiskeytown National Recreation Area, and Oregon Caves National Monument was conducted with the following objectives: 1) provide an initial, science-based evaluation of resource condition status of the Parks and include the associated data used for the evaluation; 2) provide a report that allows Park superintendents and managers to meet Government Performance Results Act and Office of Management and Budget reporting requirements; and 3) develop a reproducible framework for the assessment that can be used at other Park units. The Environmental Protection Agency’s “Framework for Assessing and Reporting on Ecological Condition” (Young and Sanzone 2002) was the basis for our assessment. This framework used six Essential Ecosystem Attributes: Landscape Condition, Biotic Condition, Chemical and Physical Characteristics, Ecological Processes, Hydrology and Geomorphology, and Disturbance Regimes. Ecological indicators were selected for each attribute. Each indicator was evaluated by determining its status (degraded, mixed, good, or unknown) and trend (declining, unchanging, improving, or unknown) using historical and recent data from a variety of sources, including the National Park Service’s Inventory and Monitoring Program, Park monitoring reports, spatial analyses using Geographic Information Systems, and other datasets. In some cases, data originated from measurements that were several decades old but remain as either the only data or the most comprehensive data. These data provided a baseline to determine status of indicators, but may be a poor predictor of future conditions. For the assessment of Redwood National and State Parks (RNSP), most of the Landscape Condition, Hydrology and Geomorphology, and aquatic Biotic Condition Attributes indicators were mixed or degraded as a result of historical timber harvest and associated roads in the Park and surrounding watersheds (Table 1-1). However, six of the 18 indicators showed improving trends, which is characteristic of a landscape recovering from previous timber harvest. Improvements were largely due to efforts by the Park and adjacent landowners to restore degraded watersheds. In addition, the large size of RNSP allows for greater protection and management of resources, and current environmental regulations and the protection of lands within the Park will likely prevent similar degradation in the future. For the assessment of Whiskeytown National Recreation Area (WHIS), most of the Landscape Condition, Hydrology and Geomorphology, and aquatic Biotic Condition indicators were mixed or degraded due to the presence of Whiskeytown Dam and anthropogenic disturbance such as historical mining, timber harvest, and recreation in the Park (Table 1-1). Few of these indicators showed improving trends because Whiskeytown Dam will probably not be removed and human disturbance is not expected to decrease. However, effective management of indicators could be facilitated by unchanging adjacent landowners and land uses, and the relatively large size and compact configuration of the Park. For the assessment of Oregon Caves National Monument (OCNM), all of the Landscape Condition indicators had mixed status because of past timber harvest, but three showed improving trends because it was assumed that the proposed expansion area will be added to the Park and timber harvest would cease once this occurs (Table 1-1).. The very small size of the OCNM may have prevented effective management of terrestrial Biotic Condition indicators in the past, but will improve after the addition of the Park expansion area. Because caves in OCNM are located at the headwaters of the watershed, they were not represented by the Hydrology and Geomorphology indicators. The Cave Invertebrates and Human Use of the Park indicators were degraded because of the long history of human visitation in the caves. Because of the lack of long-term monitoring data, status for the Cave Environment indicator was unknown, and trends could not be determined for the Cave Invertebrates, Cave Environment, and Human Use of the Park indicators. The caves are an important and unique resource for the Park, and Park monitoring will eventually allow for thorough assessment of these indicators and evaluation of the condition of cave resources. Because this was a pilot project, similar indicators were applied to all three Parks; however, the selected indicators differed in their value to each Park. The value, effectiveness, and completeness of the selected indicators were analyzed to provide Park managers with the ability to prioritize monitoring and resources for future assessments. Indicators that were selected in part because they were part of the Park’s Vital Signs Monitoring Program included: Land Use within the Watershed, Vegetation, Intertidal Communities, Cave Invertebrates, Landbirds, Invasive Plants, Water Quality, Air Quality, and Cave Environment. Indicators that could be used by the Parks to meet reporting requirements included Salmonids, Vertebrate Species of Management Consideration, Plant Species of Management Concern (because they include threatened and endangered species), Water Quality, and Human Use of the Park. For all three Parks, Invasive Aquatic Biota, Landbirds, Vertebrate Species of Management Consideration, Plant Species of Management Concern, and Forest Pests and Pathogens provided redundant or minimal value to understanding the overall natural resource conditions of the Parks. Coarse Woody Debris and Amphibians indicators could have provided important information about Park conditions but were lacking data. Riparian Composition and Vegetation indicators were important but needed greater data resolution. In general, the Parks were lacking data to describe trends in terrestrial Biotic Condition at the Park, subwatershed, and watershed scales. Focused surveys and/or monitoring are needed to better assess these terrestrial Biotic Condition indicators in the future. For all three Parks, the Disturbance Regime indicators (Climate Change, Fire Regime, and Human Use of the Park) were important because they described conditions at the regional scale. Climate change, altered fire regimes, and increases in human visitation may pose significant risks to the future condition of all three Parks and require future management actions. In particular, climate change could radically alter large-scale processes such as fire and hydrologic regimes, cause indicators to become degraded, reverse improving trends, and/or cause historical conditions to be unachievable. This could require an adjustment in expectations for desired conditions, and additional consideration when planning future restoration and management actions.