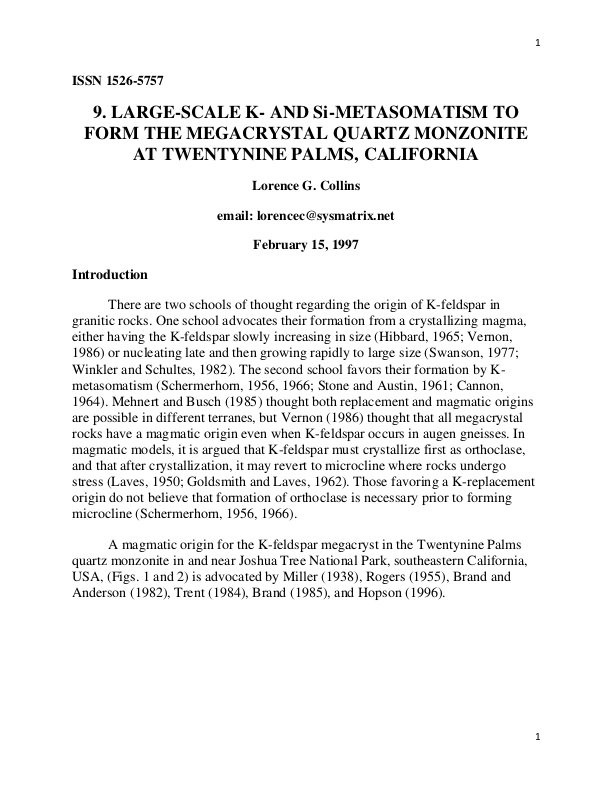 Large-scale and K- and Si- metasomatism to form the megacrystal quartz mononite at Twentynine Palms, California

There are two schools of thought regarding the origin of K-feldspar in granitic rocks. One school advocates their formation from a crystallizing magma, either having the K-feldspar slowly increasing in size (Hibbard, 1965; Vernon, 1986) or nucleating late and then growing rapidly to large size (Swanson, 1977; Winkler and Schultes, 1982). The second school favors their formation by K-metasomatism (Schermerhorn, 1956, 1966; Stone and Austin, 1961; Cannon, 1964). Mehnert and Busch (1985) thought both replacement and magmatic origins are possible in different terranes, but Vernon (1986) thought that all megacrystal rocks have a magmatic origin even when K-feldspar occurs in augen gneisses. In magmatic models, it is argued that K-feldspar must crystallize first as orthoclase, and that after crystallization, it may revert to microcline where rocks undergo stress (Laves, 1950; Goldsmith and Laves, 1962). Those favoring a K-replacement origin do not believe that formation of orthoclase is necessary prior to forming microcline (Schermerhorn, 1956, 1966). A magmatic origin for the K-feldspar megacryst in the Twentynine Palms quartz monzonite in and near Joshua Tree National Park, southeastern California, USA, (Figs. 1 and 2) is advocated by Miller (1938), Rogers (1955), Brand and Anderson (1982), Trent (1984), Brand (1985), and Hopson (1996).