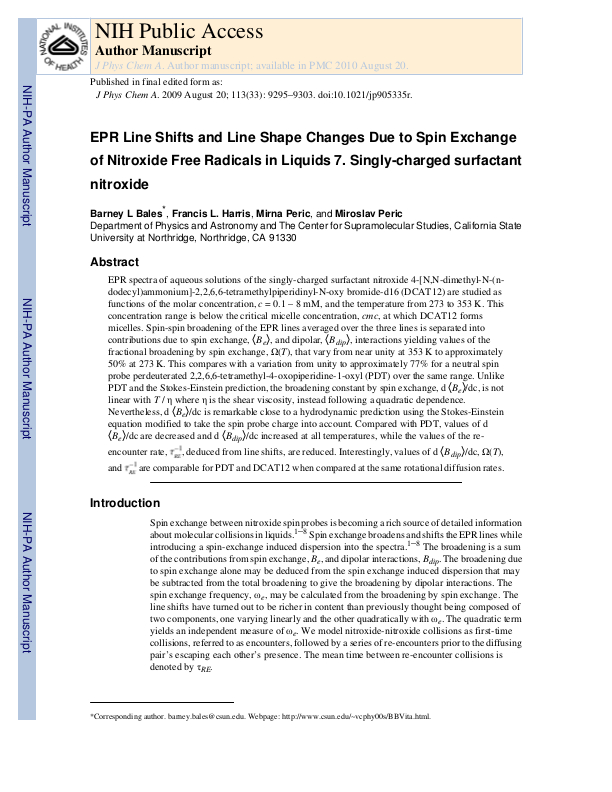 EPR spectra of aqueous solutions of the singly charged surfactant nitroxide 4-[N,N-dimethyl-N-(n-dodecyl)ammonium]-2,2,6,6-tetramethylpiperidinyl-N-oxy bromide-d16 (DCAT12) are studied as functions of the molar concentration, c = 0.1−8 mM, and the temperature from 273 to 353 K. This concentration range is below the critical micelle concentration, cmc, at which DCAT12 forms micelles. Spin−spin broadening of the EPR lines averaged over the three lines is separated into contributions due to spin exchange, ⟨Be⟩, and dipolar, ⟨Bdip⟩, interactions yielding values of the fractional broadening by spin exchange, Ω(T), that vary from near unity at 353 K to approximately 50% at 273 K. This compares with a variation from unity to approximately 77% for a neutral spin probe perdeuterated 2,2,6,6-tetramethyl-4-oxopiperidine-1-oxyl (PDT) over the same range. Unlike PDT and the Stokes−Einstein prediction, the broadening constant by spin exchange, d⟨Be⟩/dc, is not linear with T/η, where η is the shear viscosity, instead following a quadratic dependence. Nevertheless, d⟨Be⟩/dc is remarkably close to a hydrodynamic prediction using the Stokes−Einstein equation modified to take the spin probe charge into account. Compared with PDT, values of d⟨Be⟩/dc are decreased and d⟨Bdip⟩/dc increased at all temperatures, while the values of the re-encounter rate, τRE−1, deduced from line shifts, are reduced. Interestingly, values of d⟨Bdip⟩/dc, Ω(T), and τRE−1 are comparable for PDT and DCAT12 when compared at the same rotational diffusion rates.