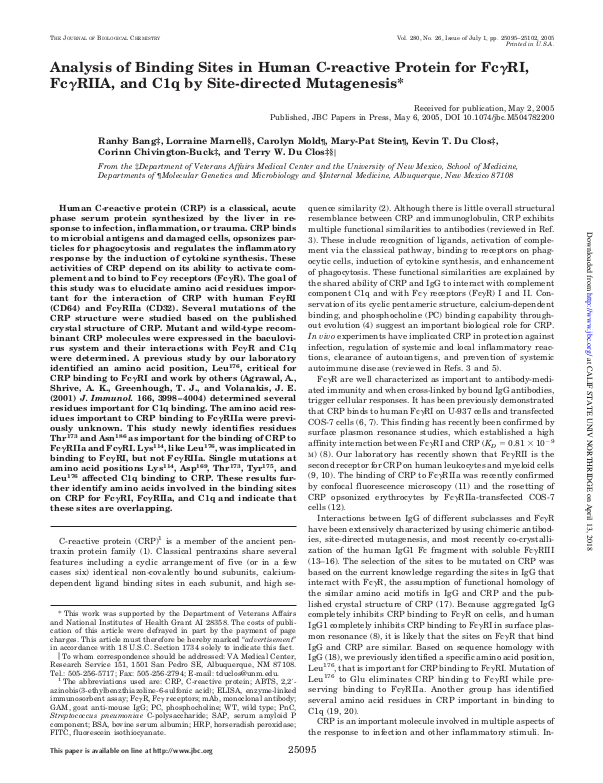 Analysis of Binding Sites in Human C-reactive Protein for FcγRI, FcγRIIA, and C1q by Site-directed Mutagenesis

Human C-reactive protein (CRP) is a classical, acute phase serum protein synthesized by the liver in response to infection, inflammation, or trauma. CRP binds to microbial antigens and damaged cells, opsonizes particles for phagocytosis and regulates the inflammatory response by the induction of cytokine synthesis. These activities of CRP depend on its ability to activate complement and to bind to Fc? receptors (Fc?R). The goal of this study was to elucidate amino acid residues important for the interaction of CRP with human Fc?RI (CD64) and Fc?RIIa (CD32). Several mutations of the CRP structure were studied based on the published crystal structure of CRP. Mutant and wild-type recombinant CRP molecules were expressed in the baculovirus system and their interactions with Fc?R and C1q were determined. A previous study by our laboratory identified an amino acid position, Leu176, critical for CRP binding to Fc?RI and work by others (Agrawal, A., Shrive, A. K., Greenhough, T. J., and Volanakis, J. E. (2001) J. Immunol. 166, 3998-4004) determined several residues important for C1q binding. The amino acid residues important to CRP binding to Fc?RIIa were previously unknown. This study newly identifies residues Thr173 and Asn186 as important for the binding of CRP to Fc?RIIa and Fc?RI. Lys114, like Leu176, was implicated in binding to Fc?RI, but not Fc?RIIa. Single mutations at amino acid positions Lys114, Asp169, Thr173, Tyr175, and Leu176 affected C1q binding to CRP. These results further identify amino acids involved in the binding sites on CRP for Fc?RI, Fc?RIIa, and C1q and indicate that these sites are overlapping.