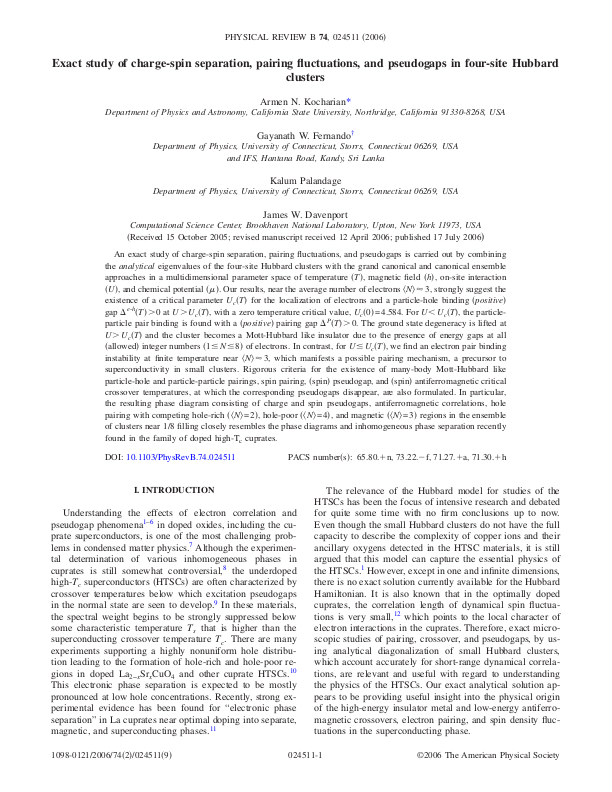 An exact study of charge-spin separation, pairing fluctuations, and pseudogaps is carried out by combining the analytical eigenvalues of the four-site Hubbard clusters with the grand canonical and canonical ensemble approaches in a multidimensional parameter space of temperature (T), magnetic field (h), on-site interaction (U), and chemical potential (μ). Our results, near the average number of electrons ⟨N⟩≈3, strongly suggest the existence of a critical parameter Uc(T) for the localization of electrons and a particle-hole binding (positive) gap Δe−h(T)>0 at U>Uc(T), with a zero temperature critical value, Uc(0)=4.584. For U<Uc(T), the particle-particle pair binding is found with a (positive) pairing gap ΔP(T)>0. The ground state degeneracy is lifted at U>Uc(T) and the cluster becomes a Mott-Hubbard like insulator due to the presence of energy gaps at all (allowed) integer numbers (1≤N≤8) of electrons. In contrast, for U≤Uc(T), we find an electron pair binding instability at finite temperature near ⟨N⟩≈3, which manifests a possible pairing mechanism, a precursor to superconductivity in small clusters. Rigorous criteria for the existence of many-body Mott-Hubbard like particle-hole and particle-particle pairings, spin pairing, (spin) pseudogap, and (spin) antiferromagnetic critical crossover temperatures, at which the corresponding pseudogaps disappear, are also formulated. In particular, the resulting phase diagram consisting of charge and spin pseudogaps, antiferromagnetic correlations, hole pairing with competing hole-rich (⟨N⟩=2), hole-poor (⟨N⟩=4), and magnetic (⟨N⟩=3) regions in the ensemble of clusters near 1/8 filling closely resembles the phase diagrams and inhomogeneous phase separation recently found in the family of doped high-Tc cuprates.