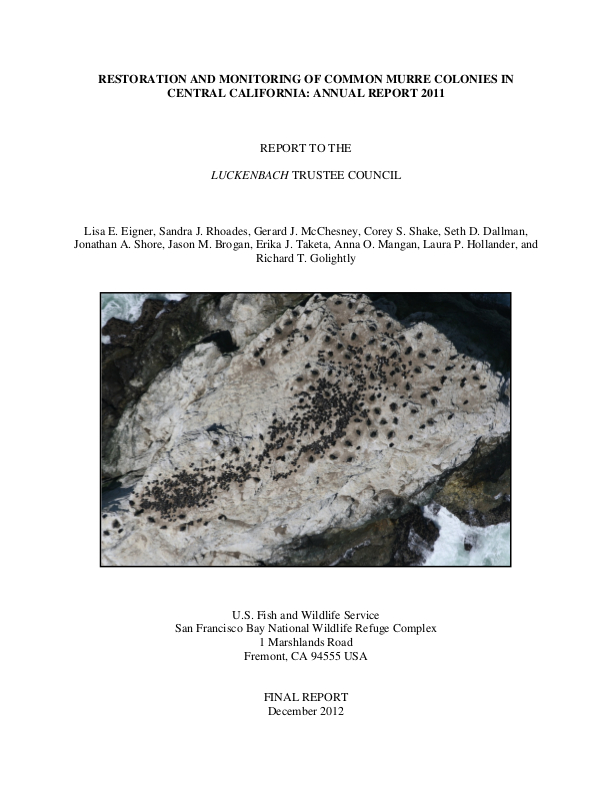 Efforts in 2011 represented the 16th year of restoration and associated monitoring of central California seabird colonies conducted by the Common Murre Restoration Project (CMRP). These efforts began in 1996 to restore breeding colonies of seabirds, especially Common Murres (Uria aalge), harmed by the 1986 Apex Houston, 1998 Command, and extended Luckenbach oil spills, gill net fishing, human disturbance, and other factors. From 1995 to 2005, the primary goal was to restore the previously extirpated Devil’s Slide Rock colony using social attraction techniques and to assess restoration needs at other central California colonies. Since 2005, efforts have been redirected to surveillance of human disturbance to central California murre colonies, assessing the impacts of that disturbance, and assessing other factors affecting growth of colonies. Additionally, the outcome of initial restoration efforts at Devil’s Slide Rock continues to be monitored. This information informs outreach and education efforts conducted by the Seabird Protection Network (coordinated by the Gulf of the Farallones National Marine Sanctuary) and assesses the success of those efforts. The goal of the Seabird Protection Network is to restore central California breeding colonies primarily through reduction of human- caused disturbance. Surveillance and monitoring were conducted almost daily from mid-April to late July at the following Common Murre colonies in central California: Point Reyes, Devil’s Slide Rock & Mainland, and the Castle-Hurricane Colony Complex. Four additional colonies were surveyed weekly or bi-weekly including three in the Drakes Bay area (Point Resistance, Millers Point Rocks, and Double Point Rocks) and San Pedro Rock (near Devil’s Slide). We measured detection and disturbance rates associated with planes, helicopters, and watercraft (or, boats). Seasonal attendance patterns, productivity, adult co-attendance patterns and reproductive success of Common Murres were also assessed. Additionally, population sizes and/or reproductive success of five other seabird species were assessed. At the Bird Island colony located near the Golden Gate, surveys were conducted three times per week, mainly by volunteers, to follow the recent murre colonization in 2008. At Point Reyes, the combined aircraft and boat detection rate (number of aircraft or boats observed per observer hour) was the lowest of any year monitored, and the combined disturbance rate (disturbance events per observer hour) was the lowest since 2002. Detection and disturbance rates at Drakes Bay colonies were also well below the baseline mean (average of 2005-2006, including aircraft, boats, and other). Devil’s Slide Rock & Mainland (DSRM) continued to have the highest combined aircraft and watercraft detection and disturbance rates of all colonies. At DSRM, combined aircraft and watercraft detection rates were lower than the baseline mean, but disturbance rates were higher. Most disturbances were agitation events (i.e., no flushing or displacement). At the Castle - Hurricane Colony Complex, the combined aircraft and boat detection rate was the lowest since 2007, but the disturbance rate was slightly higher than the baseline mean. Unmarked aircraft (e.g., private or charter) were the most commonly observed planes and helicopters and caused the most observed disturbances at all monitored colonies. The next most common source of aircraft disturbance was from military aircraft. The majority of watercraft observed were small private recreational boats (46%) followed by charter boats (26%). Three xiii small recreational private boats were responsible for the majority (50%) of disturbances. Seven vessels (12 events) were recorded inside state Special Closures at Devil’s Slide Rock and Double Point Rocks/Stormy Stack, but only one resulted in agitation disturbance to seabirds. The high count of 882 murres on Devil’s Slide Rock was 7.0% higher than the 2010 high count, but still lower than the highest count of 1,003 murres recorded in 2009. Murre reproductive success, or productivity, was greater than average at Devil’s Slide Rock and Castle Rocks& Mainland. Disturbances from Brown Pelicans (Pelecanus occidentalis) at Point Reyes resulted in very low murre productivity. Low co-attendance of murre breeding pairs during the chick-rearing period at Devil’s Slide Rock indicated that murres needed to spend more time foraging to obtain enough prey to feed chicks. Counts of Brandt’s Cormorant (Phalacrocorax pencillatus) nests were greater than in 2010 at all colony complexes. However, productivity was lower than in both 2010 and the long-term means at Point Reyes and Devil’s Slide Rock & Mainland. Productivity was only slightly higher at Castle-Hurricane than the long-term mean. Brandt’s Cormorants had two peaks of nest initiation at Point Reyes and Devil’s Slide Rock & Mainland. One occurred from April to May, and one in June, separated by a period of large-scale abandonment. Numbers of breeding Pelagic Cormorants (Phalacrocorax pelagicus) and Western Gulls (Larus occidentalis) varied among colonies compared to 2010, and productivity of monitored nests was relatively low.