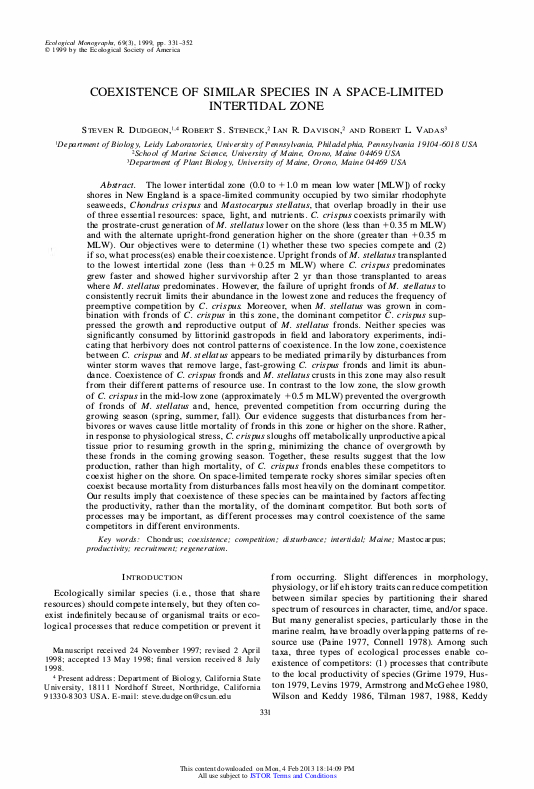 Coexistence of similar species in a space-limited intertidal zone

The lower intertidal zone (0.0 to + 1.0 m mean low water [MLW]) of rocky shores in New England is a space-limited community occupied by two similar rhodophyte seaweeds, Chondrus crispus and Mastocarpus stellatus, that overlap broadly in their use of three essential resources: space, light, and nutrients. C. crispus coexists primarily with the prostrate-crust generation of M. stellatus lower on the shore (less than +0.35 m MLW) and with the alternate upright-frond generation higher on the shore (greater than +0.35 m MLW). Our objectives were to determine (1) whether these two species compete and (2) if so, what process(es) enable their coexistence. Upright fronds of M. stellatus transplanted to the lowest intertidal zone (less than +0.25 m MLW) where C. crispus predominates grew faster and showed higher survivorship after 2 yr than those transplanted to areas where M. stellatus predominates. However, the failure of upright fronds of M. stellatus to consistently recruit limits their abundance in the lowest zone and reduces the frequency of preemptive competition by C. crispus. Moreover, when M. stellatus was grown in combination with fronds of C. crispus in this zone, the dominant competitor C. crispus suppressed the growth and reproductive output of M. stellatus fronds. Neither species was significantly consumed by littorinid gastropods in field and laboratory experiments, indicating that herbivory does not control patterns of coexistence. In the low zone, coexistence between C. crispus and M. stellatus appears to be mediated primarily by disturbances from winter storm waves that remove large, fast-growing C. crispus fronds and limit its abundance. Coexistence of C. crispus fronds and M. stellatus crusts in this zone may also result from their different patterns of resource use. In contrast to the low zone, the slow growth of C. crispus in the mid-low zone (approximately +0.5 m MLW) prevented the overgrowth of fronds of M. stellatus and, hence, prevented competition from occurring during the growing season (spring, summer, fall). Our evidence suggests that disturbances from herbivores or waves cause little mortality of fronds in this zone or higher on the shore. Rather, in response to physiological stress, C. crispus sloughs off metabolically unproductive apical tissue prior to resuming growth in the spring, minimizing the chance of overgrowth by these fronds in the coming growing season. Together, these results suggest that the low production, rather than high mortality, of C. crispus fronds enables these competitors to coexist higher on the shore. On space-limited temperate rocky shores similar species often coexist because mortality from disturbances falls most heavily on the dominant competitor. Our results imply that coexistence of these species can be maintained by factors affecting the productivity, rather than the mortality, of the dominant competitor. But both sorts of processes may be important, as different processes may control coexistence of the same competitors in different environments.