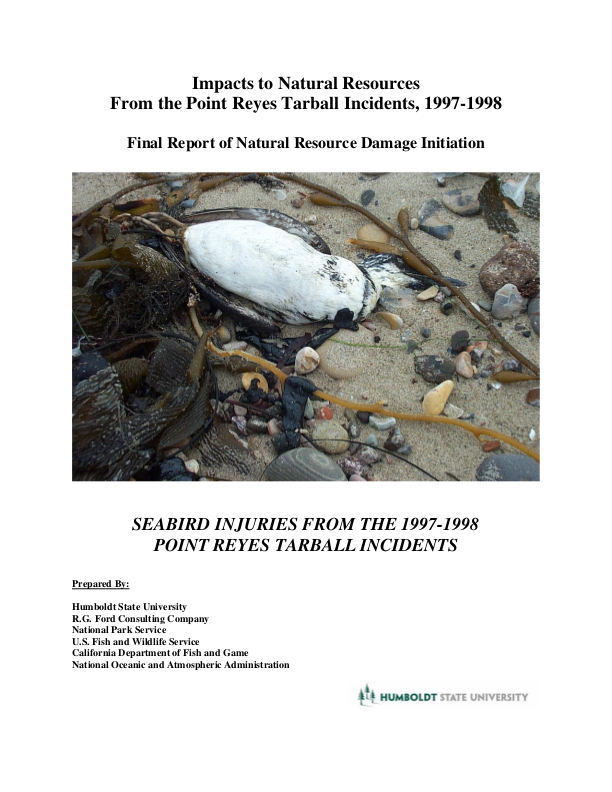 The estimated total number of seabirds (18,291) killed during the 1997-1998 Point Reyes Tarball Incidents (PRTI) was the largest reported for any oiling event in central California in the last two decades. Oil trajectory analyses and bird beaching patterns were consistent with oil leaking from the sunken vessel S.S. Jacob Luckenbach and 95% of oiled feather samples matched those from the sunken vessel. Large numbers (2,959) of individual birds were recovered on searched beaches: 2,577 were dead when found or died in captivity, while 382 underwent cleaning and captive care before release. Such high numbers of beached birds reflected a series of tarball incidents during a four-month period that spread over a large coastal area with high densities of wintering seabirds and were not related to unusual weather patterns that might have increased carcass deposition on beaches. Predominant species recovered were Common Murres (1,858), with moderate numbers of Northern Fulmars (335), Western Grebes (191), Surf Scoters (90), Brandt’s Cormorants (60), and Pacific Loons (54). Smaller numbers of threatened and endangered Marbled Murrelets (3) and Brown Pelicans (21), as well as several other species, also were recovered. A beached bird model was used to estimate total mortality from beached bird data, after accounting for factors causing undercounting of beached birds (i.e., searcher efficiency, scavenging, and unsearched beaches), at-sea loss due to carcass sinking for offshore species only, and background mortality. Estimates of total mortality, excluding released birds, were calculated for Common Murres (9,094), Marbled Murrelet (122), Brown Pelican (123), other nearshore species (2,334), and other offshore species (6,618). PRTI mortality of Common Murres was the highest ever reported for any spill event in central California. Impacts to the relatively small Drake’s Bay Colony Complex with the Point Reyes National Seashore were well documented. In 1993-1997, this complex had been recovering at a rate of 11.7% per annum from massive decline during the 1980s from other mortalities. In 1999-2000, complex size was 13% lower and complex growth had stalled. El Nino conditions caused colony abandonments and reproductive failure in 1998 but probably contributed little to the reduced complex size in 1999-2000. Recovery of this complex has been slowed by the negative impact of the PRTI.