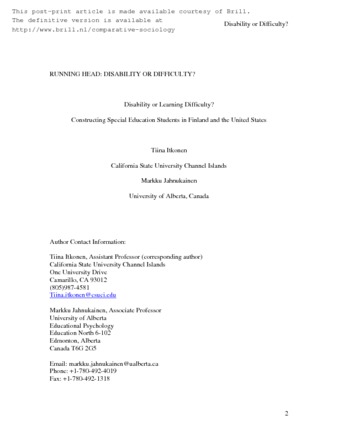 Disability or Learning Difficulty? Politicians or Educators? Constructing Special Education in Finland and the United States

(Discussion): We began by discussing the ideological traditions of Finland and the US. In essence, equal opportunity and equity are grounded on different types of goals for schooling. These goals in turn shape policy design. For example, in a system in which responsibility is collective and schooling is grounded on the notion of absolute success, students who experience difficulties or deviate from some pre-determined norm, are provided extra resources. As we showed in the case of Finland, students are constructed from an educational stand point in this type of a system. We also showed that the originating institution of the policy shapes policy design, as courts and schools operate from a different set of assumptions. The role of courts is to protect citizens’ rights, whereas the role of schools is to educate informed citizens (and a future work force). Therefore, policy originating in courts is expected to be rights-based (as in special education or desegregation policies in the US) whereas a policy initiated by the school system would be expected to be educationally based. In regard to the U.S. policy initiative to implement tiered interventions, it will be interesting to observe how this change in policy to one of local authority changes the 30-year practice. First, parent advocacy groups in the US have consistently advocated for increased federal oversight and vehemently resisted local control (Itkonen 2007). Second, the school system has an institutional history and memory which can be very difficult to change (March and Olsen 1989). Intervention model in essence would fundamentally change the way by which special education has been organized in the US. Another challenge with the proposed shift to an educational construction rests with the fact that it was first articulated in the special education statute, IDEA 2004. Since No Child Left Behind Act (NCLB) is still under reauthorization, intervention-based models are not included in the Elementary and Secondary Education Act (which was re-named to NCLB in 2002). Since a tiered model starts in the general classroom, and the first and biggest responsibility rests heavily on classroom teachers (not special educators), until such language is added to the education legislation, it is likely that RtI will remain as a choice only for schools where capacity (knowledge, time, resources) exists. Finally, our study has several limitations. First, our framework is preliminary and requires further empirical testing. Second, our findings should be examined with caution as many issues distinguishing these countries (e.g., cultural, linguistic, geographic diversity) were not included in this analysis. However, we believe that our application of construction of targets and our extension to institutional structures provide a way by which to conduct systematic cross-cultural comparisons by simultaneously examining the relationships among disability construction, policy design, and institutional arrangements at the micro-level.