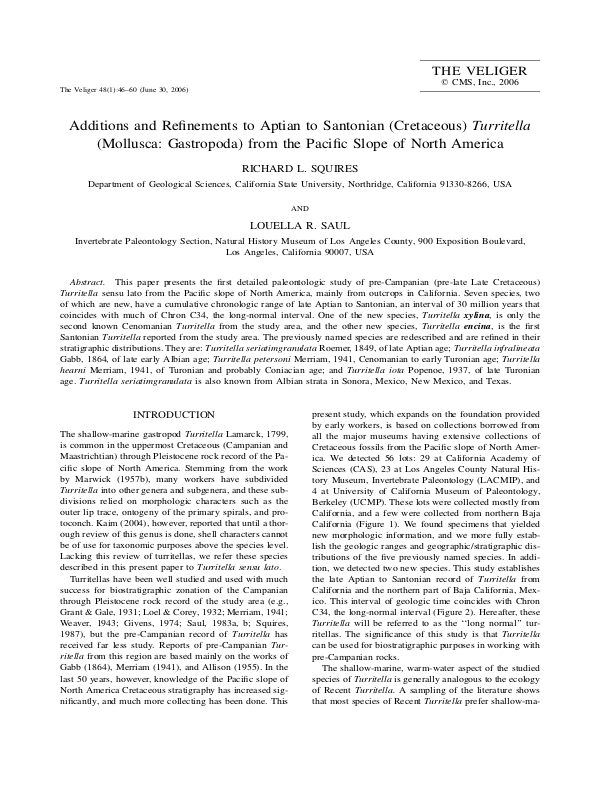 Additions and refinements to Aptian to Santonian (Cretaceous) Turritella (Mollusca, Gastropoda) from the Pacific Slope of North America

This paper presents the ?rst detailed paleontologic study of pre-Campanian (pre-late Late Cretaceous) Turritella sensu lato from the Paci?c slope of North America, mainly from outcrops in California. Seven species, two of which are new, have a cumulative chronologic range of late Aptian to Santonian, an interval of 30 million years that coincides with much of Chron C34, the long-normal interval. One of the new species, Turritella xylina, is only the second known Cenomanian Turritella from the study area, and the other new species, Turritella encina, is the ?rst Santonian Turritella reported from the study area. The previously named species are redescribed and are re?ned in their stratigraphic distributions. They are: Turritella seriatimgranulata Roemer, 1849, of late Aptian age; Turritella infralineata Gabb, 1864, of late early Albian age; Turritella petersoni Merriam, 1941, Cenomanian to early Turonian age; Turritella hearni Merriam, 1941, of Turonian and probably Coniacian age; and Turritella iota Popenoe, 1937, of late Turonian age. Turritella seriatimgranulata is also known from Albian strata in Sonora, Mexico, New Mexico, and Texas