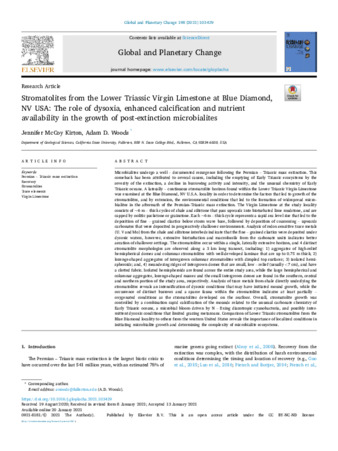 Stromatolites from the Lower Triassic Virgin Limestone at Blue Diamond, NV USA: The role of dysoxia, enhanced calcification and nutrient availability in the growth of post-extinction microbialites

Microbialites undergo a well – documented resurgence following the Permian – Triassic mass extinction. This comeback has been attributed to several causes, including the emptying of Early Triassic ecosystems by the severity of the extinction, a decline in burrowing activity and intensity, and the unusual chemistry of Early Triassic oceans. A laterally – continuous stromatolite horizon found within the Lower Triassic Virgin Limestone was examined at the Blue Diamond, NV U.S.A. locality in order to determine the factors that led to growth of the stromatolites, and by extension, the environmental conditions that led to the formation of widespread microbialites in the aftermath of the Permian-Triassic mass extinction. The Virgin Limestone at the study locality consists of ~6 m – thick cycles of shale and siltstone that pass upwards into bioturbated lime mudstone, and are capped by oolitic packstone or grainstone. Each ~6 m – thick cycle represents a rapid sea level rise that led to the deposition of fine – grained clastics below storm wave base, followed by deposition of coarsening – upwards carbonates that were deposited in progressively shallower environments. Analysis of redox-sensitive trace metals (U. V and Mo) from the shale and siltstone interbeds indicate that the fine – grained clastics were deposited under dysoxic waters, however, extensive bioturbation and macrofossils from the carbonate units indicates better aeration of shallower settings. The stromatolites occur within a single, laterally extensive horizon, and 4 distinct stromatolite morphologies are observed along a 3 km long transect, including: 1) aggregates of high-relief hemispherical domes and columnar stromatolites with well-developed laminae that are up to 0.75 m thick; 2) lozenge-shaped aggregates of intergrown columnar stromatolites with dimpled top surfaces; 3) isolated hemispheroids; and, 4) meandering ridges of intergrown domes that are small, low – relief (usually <7 cm), and have a clotted fabric. Isolated hemispheroids are found across the entire study area, while the large hemispherical and columnar aggregates, lozenge-shaped masses and the small intergrown domes are found in the southern, central and northern portion of the study area, respectively. Analysis of trace metals from shale directly underlying the stromatolites reveals an intensification of dysoxic conditions that may have initiated mound growth, while the occurrence of distinct burrows and a sparse fauna within the stromatolites indicates at least partially – oxygenated conditions as the stromatolites developed on the seafloor. Overall, stromatolite growth was controlled by a combination rapid calcification of the mounds related to the unusual carbonate chemistry of Early Triassic oceans, a microbial bloom driven by N – fixing diazotropic cyanobacteria, and possibly intermittent dysoxic conditions that limited grazing metazoans. Comparison of Lower Triassic stromatolites from the Blue Diamond locality to others from the western United States reveals the importance of localized conditions in initiating microbialite growth and determining the complexity of microbialite ecosystems.