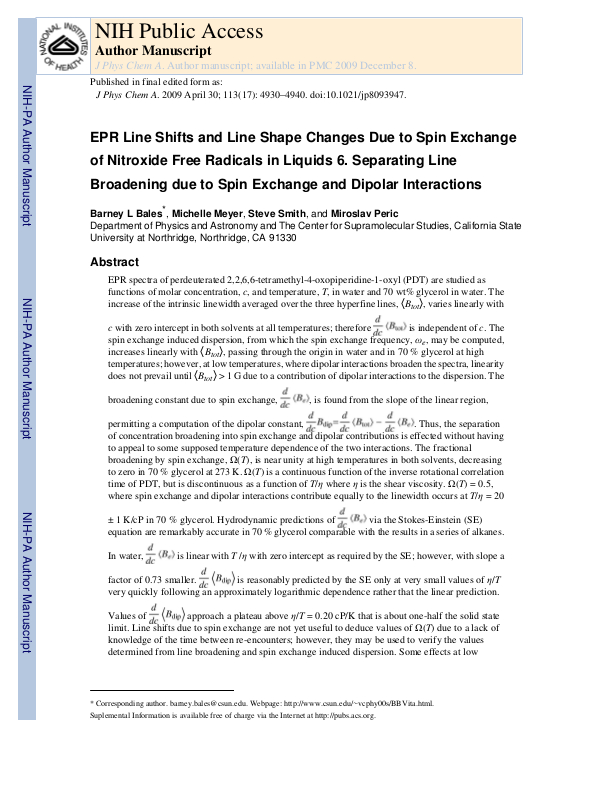 EPR spectra of perdeuterated 2,2,6,6-tetramethyl-4-oxopiperidine-1-oxyl (PDT) are studied as functions of molar concentration, c, and temperature, T, in water and 70 wt % glycerol in water. The increase of the intrinsic line width averaged over the three hyperfine lines, ⟨Btot⟩, varies linearly with c with zero intercept in both solvents at all temperatures; therefore d⟨Btot⟩/dc is independent of c. The spin exchange induced dispersion, from which the spin exchange frequency, ωe, may be computed, increases linearly with ⟨Btot⟩, passing through the origin in water and in 70% glycerol at high temperatures; however, at low temperatures, where dipolar interactions broaden the spectra, linearity does not prevail until ⟨Btot⟩ > 1 G due to a contribution of dipolar interactions to the dispersion. The broadening constant due to spin exchange, d⟨Be⟩/dc, is found from the slope of the linear region, permitting a computation of the dipolar constant, d⟨Bdip⟩/dc = d⟨Btot⟩/dc − d⟨Be⟩/dc. Thus, the separation of concentration broadening into spin exchange and dipolar contributions is effected without having to appeal to some supposed temperature dependence of the two interactions. The fractional broadening by spin exchange, Ω(T), is near unity at high temperatures in both solvents, decreasing to zero in 70% glycerol at 273 K. Ω(T) is a continuous function of the inverse rotational correlation time of PDT but is discontinuous as a function of T/η where η is the shear viscosity. Ω(T) = 0.5, where spin exchange and dipolar interactions contribute equally to the line width occurs at T/η = 20 ± 1 K/cP in 70% glycerol. Hydrodynamic predictions of d⟨Be⟩/dc via the Stokes−Einstein (SE) equation are remarkably accurate in 70% glycerol comparable with the results in a series of alkanes. In water, d⟨Be⟩/dc is linear with T/η with zero intercept as required by the SE; however, with slope a factor of 0.73 smaller. d⟨Bdip⟩/dc is reasonably predicted by the SE only at very small values of η/T very quickly following an approximately logarithmic dependence rather that the linear prediction. Values of d⟨Bdip⟩/dc approach a plateau above η/T = 0.20 cP/K that is about one-half the solid state limit. Line shifts due to spin exchange are not yet useful to deduce values of Ω(T) due to a lack of knowledge of the time between re-encounters; however, they may be used to verify the values determined from line broadening and spin exchange induced dispersion. Some effects at low temperatures in 70% glycerol suggest that the effects of dipolar interaction are inadequately described by the widely accepted theory.