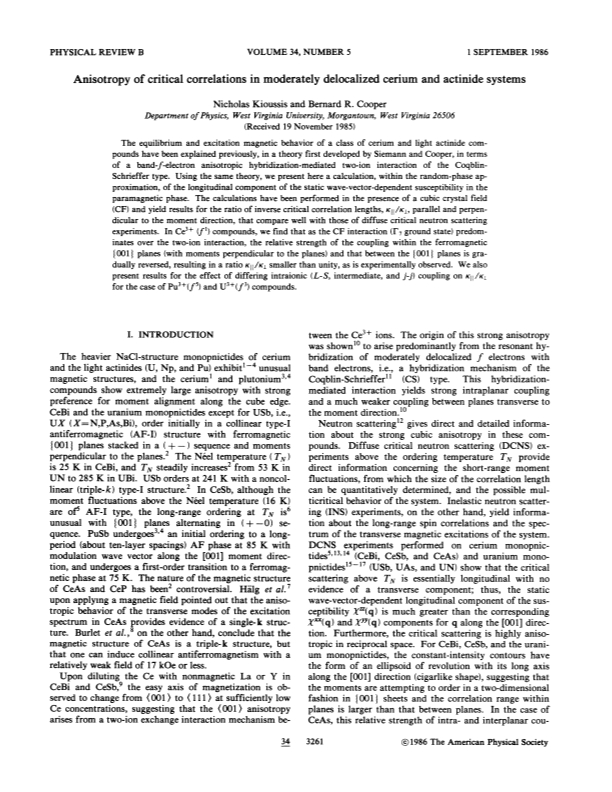 /K_, parallel and perpendicular to the moment direction, that compare well with those of diffuse critical neutron scattering experiments. In Ce3+ (f1) compounds, we find that as the CF interaction (F7 ground state) predominates over the two-ion interaction, the relative strength of the coupling within the ferromagnetic [001] planes (with moments perpendicular to the planes) and that between the [001] planes is gradually reversed, resulting in a ratio K

The equilibrium and excitation magnetic behavior of a class of cerium and light actinide compounds have been explained previously, in a theory first developed by Siemann and Cooper, in terms of a band-f-electron anisotropic hybridization-mediated two-ion interaction of the Coqblin- Schrieffer type. Using the same theory, we present here a calculation, within the random-phase approximation, of the longitudinal component of the static wave-vector-dependent susceptibility in the paramagnetic phase. The calculations have been performed in the presence of a cubic crystal field (CF) and yield results for the ratio of inverse critical correlation lengths, K

/K_ smaller than unity, as is experimentally observed. We also present results for the effect of differing intraionic (L-S,intermediate, and j-j) coupling on K