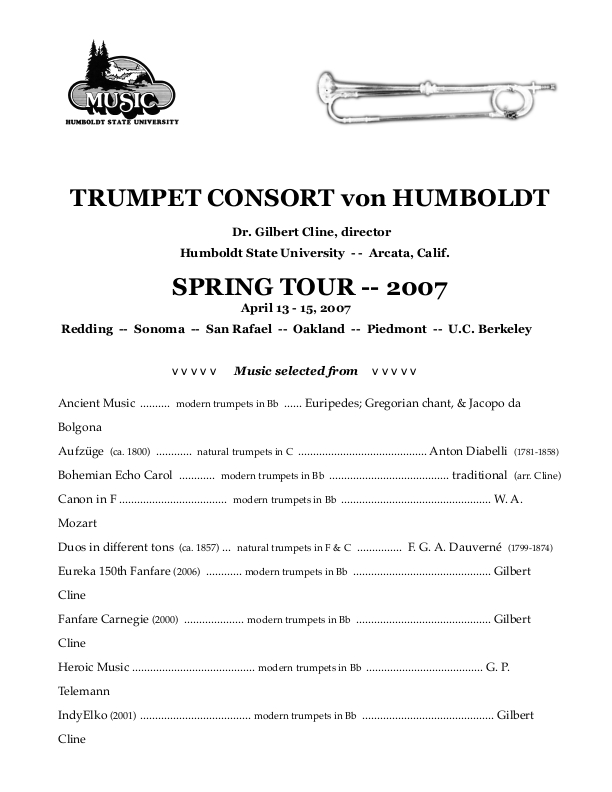 Trumpet Consort von Humboldt focuses on the baroque trumpet -- having no valves or any moving parts -- and a rich tradition of centuries of music for trumpet. This “whole consort” uses replica trumpets made by David Edwards (London) of the 1667 English trumpet in copper and silver by Simon Beale. TCvH has also used trumpets in Bb and C, low F, high D and Eb, and piccolo Bb and A. TCvH joined Oregon's Jefferson Baroque Orchestra in a rare performance of Handel's “Royal Fireworks Music” and has assisted in concerts in Sacramento and in Davis. An ongoing quest has been to perform, as brass players did so famously in the old days, from civic towers, so TCvH has performed from towers on the campuses of U. C. Berkeley and Stanford, in both cases also with carillon. Dr. Cline gained practical experience in baroque trumpet performances, often as a soloist, with Seattle Baroque, Indianapolis Baroque Orchestra, Portland Baroque Orchestra, Musica Angelica Baroque (Los Angeles), Trinity Consort (Portland), Jefferson Baroque Orchestra (Ashland), San Francisco Bay Area ensembles Magnificat and American Bach Soloists, the Oregon Coast Festival, and the San Luis Obispo Mozart Festival. Instrument of the court and professional guilds, the true trumpet (7-to-8 foot folded trumpet) uses the upper two octaves of the harmonic series. This long trumpet is the one employed in works by Bach, Handel, and so many others up until the time of Mozart, Beethoven, and Haydn -- when the clarinet (a name deriving from the high “clarino” trumpet) usurped the trumpet as a prominent wind instrument. TCvH achieves authentic sounds by not using nodal vent holes found on other baroque trumpets used by many professionals, and enjoys playing one-handed. Other TCvH elements are use of specialized baroque trumpet mouthpieces (different from modern ones) with a much larger throat (hole/bore) and a larger shank and outlet, and tuning bits and crooks. Our Beale trumpets, like genuine old trumpets, have no venturi/taper; except for the bell flare they fit the acoustical descriptor of being cylindrical, unlike modern trumpets and other baroque trumpet replicas.