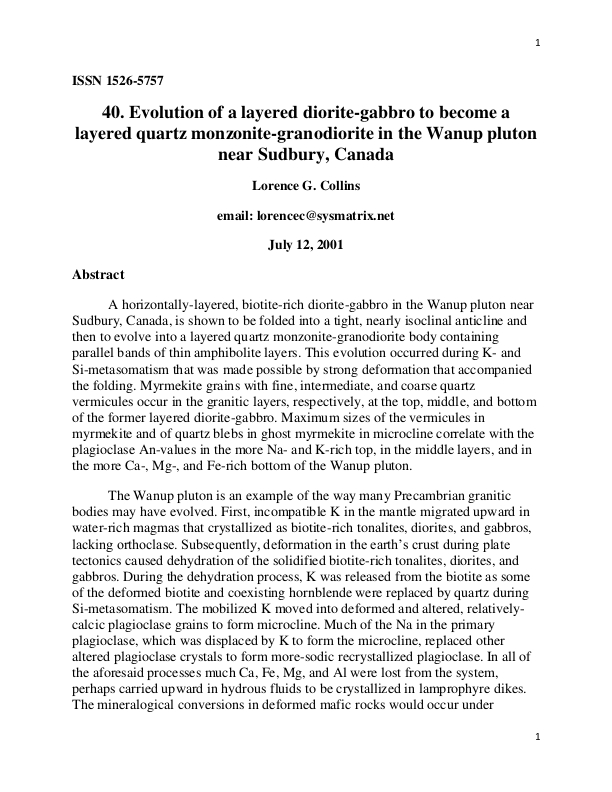 Evolution of a layered diorite-gabbro to become a layered quartz monzonite-granodiorite in the Wanup pluton near Sudbury, Canada

A horizontally-layered, biotite-rich diorite-gabbro in the Wanup pluton near Sudbury, Canada, is shown to be folded into a tight, nearly isoclinal anticline and then to evolve into a layered quartz monzonite-granodiorite body containing parallel bands of thin amphibolite layers. This evolution occurred during K- and Si-metasomatism that was made possible by strong deformation that accompanied the folding. Myrmekite grains with fine, intermediate, and coarse quartz vermicules occur in the granitic layers, respectively, at the top, middle, and bottom of the former layered diorite-gabbro. Maximum sizes of the vermicules in myrmekite and of quartz blebs in ghost myrmekite in microcline correlate with the plagioclase An-values in the more Na- and K-rich top, in the middle layers, and in the more Ca-, Mg-, and Fe-rich bottom of the Wanup pluton. The Wanup pluton is an example of the way many Precambrian granitic bodies may have evolved. First, incompatible K in the mantle migrated upward in water-rich magmas that crystallized as biotite-rich tonalites, diorites, and gabbros, lacking orthoclase. Subsequently, deformation in the earth’s crust during plate tectonics caused dehydration of the solidified biotite-rich tonalites, diorites, and gabbros. During the dehydration process, K was released from the biotite as some of the deformed biotite and coexisting hornblende were replaced by quartz during Si-metasomatism. The mobilized K moved into deformed and altered, relatively-calcic plagioclase grains to form microcline. Much of the Na in the primary plagioclase, which was displaced by K to form the microcline, replaced other altered plagioclase crystals to form more-sodic recrystallized plagioclase. In all of the aforesaid processes much Ca, Fe, Mg, and Al were lost from the system, perhaps carried upward in hydrous fluids to be crystallized in lamprophyre dikes. The mineralogical conversions in deformed mafic rocks would occur under subsolidus conditions and change the tonalites, diorites, and gabbros into myrmekite-bearing quartz monzonite or granodiorite and locally into granite. Then, later, re-heating of these rocks above melting temperatures could mobilize them as magmas to form higher-level granitic intrusions.