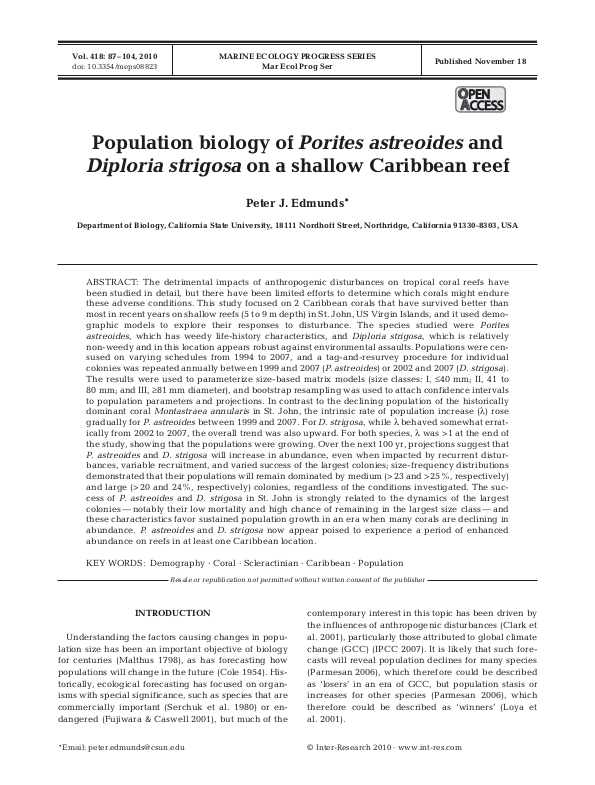 The detrimental impacts of anthropogenic disturbances on tropical coral reefs have been studied in detail, but there have been limited efforts to determine which corals might endure these adverse conditions. This study focused on 2 Caribbean corals that have survived better than most in recent years on shallow reefs (5 to 9 m depth) in St. John, US Virgin Islands, and it used demographic models to explore their responses to disturbance. The species studied were Porites astreoides, which has weedy life-history characteristics, and Diploria strigosa, which is relatively non-weedy and in this location appears robust against environmental assaults. Populations were censused on varying schedules from 1994 to 2007, and a tag-and-resurvey procedure for individual colonies was repeated annually between 1999 and 2007 (P. astreoides) or 2002 and 2007 (D. strigosa). The results were used to parameterize size-based matrix models (size classes: I, ≤40 mm; II, 41 to 80 mm; and III, ≥81 mm diameter), and bootstrap resampling was used to attach confidence intervals to population parameters and projections. In contrast to the declining population of the historically dominant coral Montastraea annularis in St. John, the intrinsic rate of population increase (λ) rose gradually for P. astreoides between 1999 and 2007. For D. strigosa, while λ behaved somewhat erratically from 2002 to 2007, the overall trend was also upward. For both species, λ was >1 at the end of the study, showing that the populations were growing. Over the next 100 yr, projections suggest that P. astreoides and D. strigosa will increase in abundance, even when impacted by recurrent disturbances, variable recruitment, and varied success of the largest colonies; size-frequency distributions demonstrated that their populations will remain dominated by medium (>23 and >25%, respectively) and large (>20 and 24%, respectively) colonies, regardless of the conditions investigated. The success of P. astreoides and D. strigosa in St. John is strongly related to the dynamics of the largest colonies—notably their low mortality and high chance of remaining in the largest size class—and these characteristics favor sustained population growth in an era when many corals are declining in abundance. P. astreoides and D. strigosa now appear poised to experience a period of enhanced abundance on reefs in at least one Caribbean location.