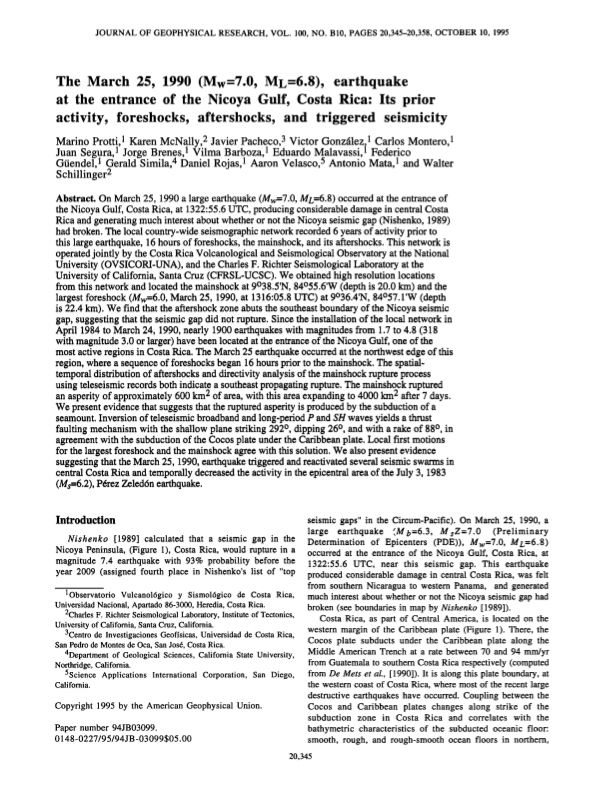 On March 25, 1990 a large earthquake (Mw = 7.0, ML = 6.8) occurred at the entrance of the Nicoya Gulf, Costa Rica, at 1322:55.6 UTC, producing considerable damage in central Costa Rica and generating much interest about whether or not the Nicoya seismic gap (Nishenko, 1989) had broken. The local country‐wide seismographic network recorded 6 years of activity prior to this large earthquake, 16 hours of foreshocks, the mainshock, and its aftershocks. This network is operated jointly by the Costa Rica Volcanological and Seismological Observatory at the National University (OVSICORI‐UNA), and the Charles F. Richter Seismological Laboratory at the University of California, Santa Cruz (CFRSL‐UCSC). We obtained high resolution locations from this network and located the mainshock at 9°38.5′N, 84°55.6′W (depth is 20.0 km) and the largest foreshock (Mw = 6.0, March 25, 1990, at 1316:05.8 UTC) at 9°36.4′N, 84°57.1′W (depth is 22.4 km). We find that the aftershock zone abuts the southeast boundary of the Nicoya seismic gap, suggesting that the seismic gap did not rupture. Since the installation of the local network in April 1984 to March 24, 1990, nearly 1900 earthquakes with magnitudes from 1.7 to 4.8 (318 with magnitude 3.0 or larger) have been located at the entrance of the Nicoya Gulf, one of the most active regions in Costa Rica. The March 25 earthquake occurred at the northwest edge of this region, where a sequence of foreshocks began 16 hours prior to the mainshock. The spatial‐temporal distribution of aftershocks and directivity analysis of the mainshock rupture process using teleseismic records both indicate a southeast propagating rupture. The mainshock ruptured an asperity of approximately 600 km2 of area, with this area expanding to 4000 km2 after 7 days. We present evidence that suggests that the ruptured asperity is produced by the subduction of a seamount. Inversion of teleseismic broadband and long‐period P and SH waves yields a thrust faulting mechanism with the shallow plane striking 292°, dipping 26°, and with a rake of 88°, in agreement with the subduction of the Cocos plate under the Caribbean plate. Local first motions for the largest foreshock and the mainshock agree with this solution. We also present evidence suggesting that the March 25, 1990, earthquake triggered and reactivated several seismic swarms in central Costa Rica and temporally decreased the activity in the epicentral area of the July 3, 1983 (Ms = 6.2), Pérez Zeledón earthquake.