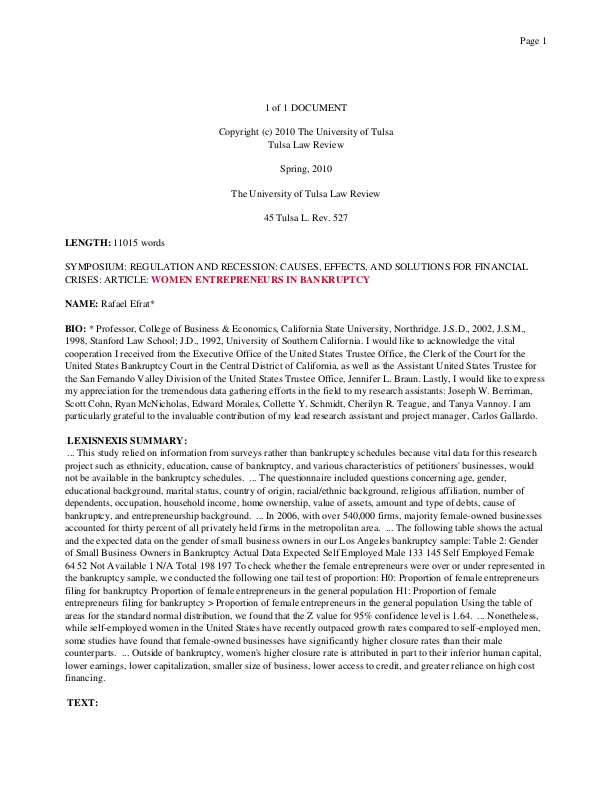 This study relied on information from surveys rather than bankruptcy schedules because vital data for this research project such as ethnicity, education, cause of bankruptcy, and various characteristics of petitioners' businesses, would not be available in the bankruptcy schedules. ... The questionnaire included questions concerning age, gender, educational background, marital status, country of origin, racial/ethnic background, religious affiliation, number of dependents, occupation, household income, home ownership, value of assets, amount and type of debts, cause of bankruptcy, and entrepreneurship background. ... In 2006, with over 540,000 firms, majority female-owned businesses accounted for thirty percent of all privately held firms in the metropolitan area. ... The following table shows the actual and the expected data on the gender of small business owners in our Los Angeles bankruptcy sample: Table 2: Gender of Small Business Owners in Bankruptcy Actual Data Expected Self Employed Male 133 145 Self Employed Female 64 52 Not Available 1 N/A Total 198 197 To check whether the female entrepreneurs were over or under represented in the bankruptcy sample, we conducted the following one tail test of proportion: Proportion of female entrepreneurs filing for bankruptcy Proportion of female entrepreneurs in the general population H1: Proportion of female entrepreneurs filing for bankruptcy > Proportion of female entrepreneurs in the general population Using the table of areas for the standard normal distribution, we found that the Z value for 95% confidence level is 1.64. ... Nonetheless, while self-employed women in the United States have recently outpaced growth rates compared to self-employed men, some studies have found that female-owned businesses have significantly higher closure rates than their male counterparts. ... Outside of bankruptcy, women's higher closure rate is attributed in part to their inferior human capital, lower earnings, lower capitalization, smaller size of business, lower access to credit, and greater reliance on high cost financing.