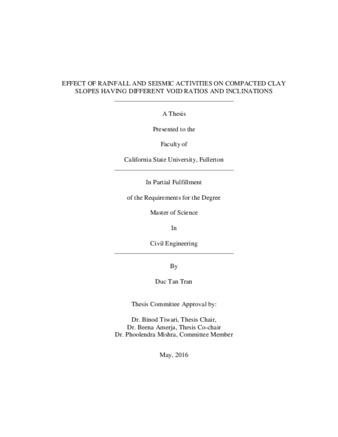 Effect of Rainfall and Seismic Activities on Compacted Clay Slopes Having Different Void Ratios and Inclinations.

Landslides, which have been existing around the world, are considered as environmental hazards. The number of landslide hazard is increasing every year. Although there are different causes of landslides, two major causes are rainfall and earthquake. Rainfall increases pore water pressure, changes the degree of saturation and causes a loss of strength in the soil. Therefore, the equilibrium can no longer be maintained in the slope, and a failure occurs. Likewise, when an earthquake occurs, the seismic force associated with the earthquake triggers mass movement such as rock fall, debris flow, and others forms of mass movement. In an attempt to evaluate the effect of rainfall in triggering landslides, a series of physical slope models were prepared in laboratory at different soil void ratios, and slope inclinations. Slope stability and deformation analyses were carried out in order to not only further understand the effect of rainfall on slope stability, but also obtain a relationship between void ratio, intensity and duration of rainfall, and slope inclination on soil slope stability. Collected soil samples from a compacted fill area in Mission Viejo, CA were placed into the Plexiglas container and compacted to the desired void ratios to form physical models at the inclinations of 40 and 45 degrees to introduce targeted rainfall with a rain simulation system in order to measure the seepage rate, moisture content, degree of saturation and surface erosion with time. After these static slope experiments, another experimental model was prepared and shaken on the shake table to determine the relationship between void ratio, seismic acceleration, seepage velocity and slope stability. The soil sample was placed into the same Plexiglas container and compacted to a void ratio of 1.2 to form the same 60 cm thick model, which was later cut into a 40 degree slope. Accelerometers were then placed on the slope to measure the amplification of seismic acceleration at different depths during shaking. Tensiometers were also installed on the slope at different locations to measure the variation of pore water pressure with time. The slope was shaken with different accelerations and frequencies for multiple cycles. Rainfall stimulator device was then placed on the top of the slope immediately after the shaking event. The targeted rainfall was introduced to evaluate the stability of the slope after shaking event. The results were used to perform slope stability and finite element analyses in Geo-Studio 2012- Slope/W, Seep/W, Sigma/W and Quake/W. Overall, the results of static slope stability modeling showed that pore water pressure and the velocity of wetting front of the slope do not increase uniformly over the entire slope during the rainfall period. Time required to saturate the soil decreases with an increase in the void ratio for the same intensity of rainfall. The velocity of movement of wetting front decreased for the slopes prepared at larger angle of inclination compared to the one prepared at smaller angle of inclination when subjected to same intensity and duration of rainfall. The values of factor of safety of the slope for the same intensity and duration of rainfall dropped with an increase in void ratio. In addition, a slope having smaller angle of inclination is more stable than the one having lager angle of inclination for same void ratio, and intensity and duration of rainfall. The results of seismic slope stability analysis subjected to post-seismic rainfall event showed that there was no significant change in pore water pressure during shaking and no catastrophic failure occurred during post-shaking rainfall event. The velocity of movement of wetting front decreased for the post-shaking rainfallinduced slopes compared to the static condition. Besides, the slope subjected to rainfall without shaking event exhibited 10% lower factor of safety compared to the slope subjected to post-seismic rainfall event. The deformation obtained from numerical analysis for both of static and seismic slopes were larger than that obtained from the laboratory experiments. Moreover, the numerical analyses for the case study matched well for the results obtained from the laboratory experiments.