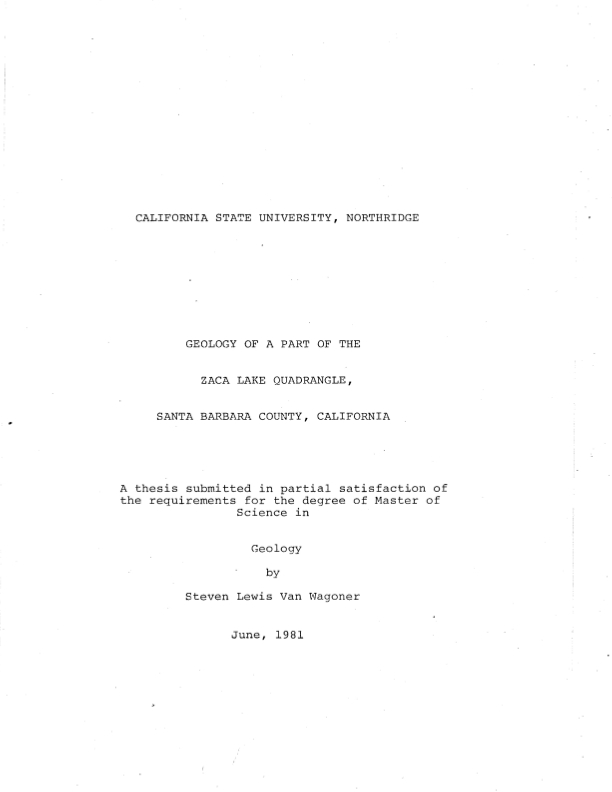 Geology of a part of the Zaca Lake quadrangle, Santa Barbara County, California

Detailed geologic mapping and study of the northeastern portion of the Zaca Lake quadrangle, Santa Barbara County, California, reveals the following stratigraphic and structural features. The oldest unit in the area, a melange of mudstone, sandstone, greenstone, serpentinite, chert, and coarse-grained igneous rocks, is the Cretaceous and Jurassic Franciscan Complex basement. In fault contact with the Franciscan is the Espada Formation, a series of marine mudstone beds with lesser amounts of thin turbidite sandstone beds and channel-filling conglomerate of eastern provenance, which is probably of Late Jurassic and Cretaceous age. In conformable contact with the Espada, the Fish Creek conglomerate is of probable turbidite origin with a western provenance and is early Late Cretaceous in age. In fault contact with the Fish Creek, the Unnamed shale and Unnamed sandstone of Dibblee (1966) combined mainly is marine mudstone and turbidite sandstone with an eastern provenance and is Late Cretaceous in age. Unconformably overlying the Unnamed shale and sandstone, the Carrie Creek Formation is mostly amalgamated turbidite sandstone with lesser amounts of conglomerate and mudstone with an eastern provenance and is Late Cretaceous in age. Unconformably overlying the Carrie Creek, the Branch Canyon Formation is a transgressive marine sequence consisting primarily of sandstone of early Miocene age. Conformably overlying the Branch Canyon, the Monterey Formation mainly is marine mudstone and shale in the lower part with porcelanite and porcelaneous mudstone becoming dominant in the upper part and is middle Miocene in age. The oldest structural event recorded in the area, other than those related to the Franciscan melange, is a major uplift of Franciscan terrane to the west. After subsidence of this terrane, the next younger structural event was the migration of a submarine fan channel which resulted in a Late Cretaceous parallel unconformity between the Unnamed shale and sandstone and the Carrie Creek. Uplift, tilting, erosion, and subsequent submergence resulted in a post-Carrie Creek, pre-Branch Canyon slightly angular unconformity. The Hurricane Deck syncline and several associated folds and faults, as well as uplift, resulted from post-Monterey, pre-Pleistocene compression. A northwest-southeast-trending fault is related to the Big Pine Fault of Miocene to Recent age.