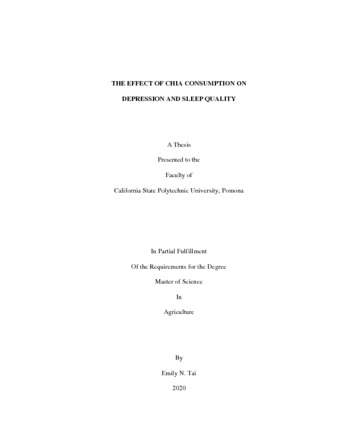 The Effect of Chia Consumption on Depression and Sleep Quality

In recent years, Major Depressive Disorder (MDD) has been documented with both higher rates of incidence and earlier age of onset. Though treatments for MDD currently exist, they are limited by inherent obstacles, such as anergia and decreased motivation, or by external obstacles such as lack of knowledge or social stigma. Complications such as these could potentially be improved upon through dietary intervention, with dietary changes allowing for a mitigation of depressive symptoms that can compliment traditional antidepressant treatment. Chia, as a food product high in omega-3 fatty acids, tryptophan, and antioxidants, could be beneficial for the management of MDD. In addition, because chia can be easily incorporated into different foods, it can be easily introduced to the diets of individuals who suffer decreased motivation or energy due to depression. To study the potential effects, participants from the California State Polytechnic University, Pomona campus were recruited for an 8-week study period, taking either water or chia mixed with water 30 minutes prior to each meal. Depressive symptoms, sleep quality, and urinary serotonin were measured through the Major Depression Inventory, the Pittsburg Sleep Quality Index, and urinary serotonin ELISA results taken before, during, and after the treatment period. Though chia supplementation was not confirmed to reduce depressive symptoms, improve sleep quality, or increase urinary serotonin in this study, further examination into alternative methods of processing chia could still prove beneficial.