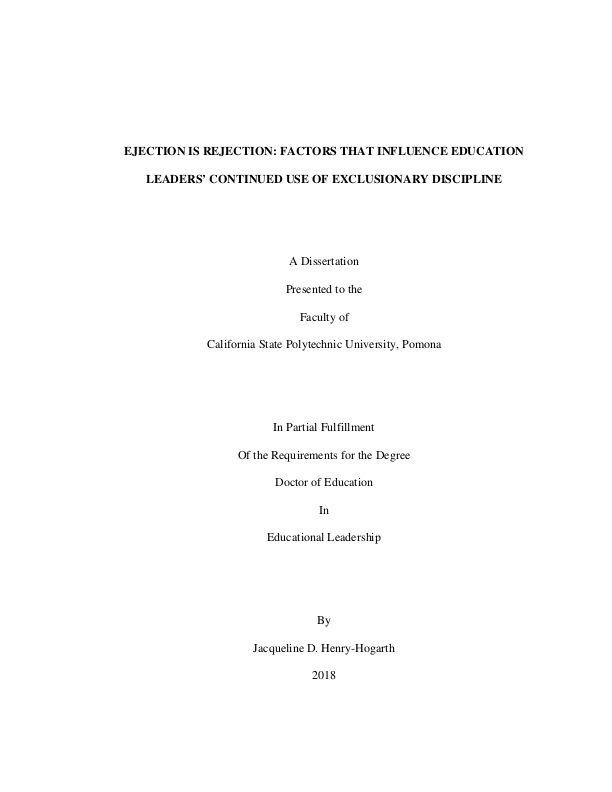 Ejection Is Rejection: Factors That Influence Education Leaders' Continued Use of Exclusionary Discipline

When students are removed from their learning environment, their learning is interrupted and disrupted (American Psychological Association, 2006; Kim, Losen, & Hewitt, 2010; Skiba, Eckes, & Brown, 2009). Yet exclusionary discipline is a primary practice of the K-12 school system both locally and nationally (U.S. Department of Education, 2016), even when other forms of discipline are available. The purpose of this study was to examine what factors, such as race, gender, and behavioral outcomes, influence education leaders’ discretionary decisions to remove students from the classroom for disciplinary infractions. Specifically, the study attempted to answer an overarching research question of what specific factors K-12 education leaders use in their decision-making process with an individual student’s disciplinary decision when they have the discretion to choose between suspension and/or expulsion and other discipline options. The researcher attempted to answer this overarching question by answering five sub-questions that addressed factors such as race, gender, needs met, purpose of use of exclusionary discipline, effectiveness of the use of exclusionary discipline, and whether the education leaders’ words comported with their action in the use of exclusionary discipline. A theoretical framework that included critical race theory, applied behavior analysis, and Starratt’s ethical leadership model guided the study. Using a method that included a survey, one-on-one semi-structured in-person interviews, and on-site and discipline panel observations, the findings strongly suggested that unconscious biases, the need to adhere to a zero-tolerance policy, and a lack of other discipline options all influence the education leaders’ decisions regarding exclusionary discipline. The findings further showed that the education leaders continue to use exclusionary discipline because it meets their needs to do their jobs within pressing time constraints and with the perception that they are being effective.