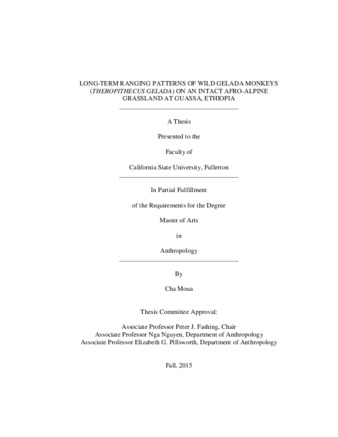 Long-term studies of animal ranging ecology are critical to understanding how animals utilize their habitat across space and time. Although gelada monkeys (Theropithecus gelada) inhabit an unusual, high altitude habitat that presents unique ecological challenges, no long-term studies of their ranging behavior have been conducted. To close this gap, I investigated the daily path length (DPL), annual home ranges (95%), and annual core areas (50%) of a band of ~220 wild gelada monkeys at Guassa, Ethiopia, from January 2007 to December 2011 (for total of n = 785 full-day follows). I estimated annual home ranges and core area using the fixed kernel reference (FK REF) and smoothed cross-validation (FK SCV) bandwidths, and the minimum convex polygon (MCP) method. Both annual home range (MCP - 2007: 5.9 km2 ; 2008: 8.6 km2 ; 2009: 9.2 km2 ; 2010: 11.5 km2 ; 2011: 11.6 km2 ) and core area increased over the 5-year study period. The MCP and FK REF generated broadly consistent, though slightly larger estimates that contained areas in which the geladas were never observed. All three methods omitted one to 19 sleeping sites from the home range depending on the year. Thus, neither the MCP nor fixed kernel estimators were more accurate than the other. Similarly, mean annual DPL (± SE m) increased over the study period (2007: 2,848±57 m; 2008: 3,339±65 m; 2009: 3,272±72 m; 2010: 3,835±80 m; 2011: 4,100±86 m). In general, the geladas showed remarkable variation in daily, monthly, and annual DPL. I also investigated the effects of movement across uneven topography on DPL, and I discuss the ecological implications of these findings. I compare the ranging behavior of geladas at Guassa to (a) geladas at other study sites, (b) to Papio (baboon) species, (c) to both terrestrial and arboreal primates, and (d) to grazing ungulates. The extensive interannual variability in ranging patterns in this study demonstrates the importance of longterm monitoring for wild nonhuman primates and its implications for conservation policy.