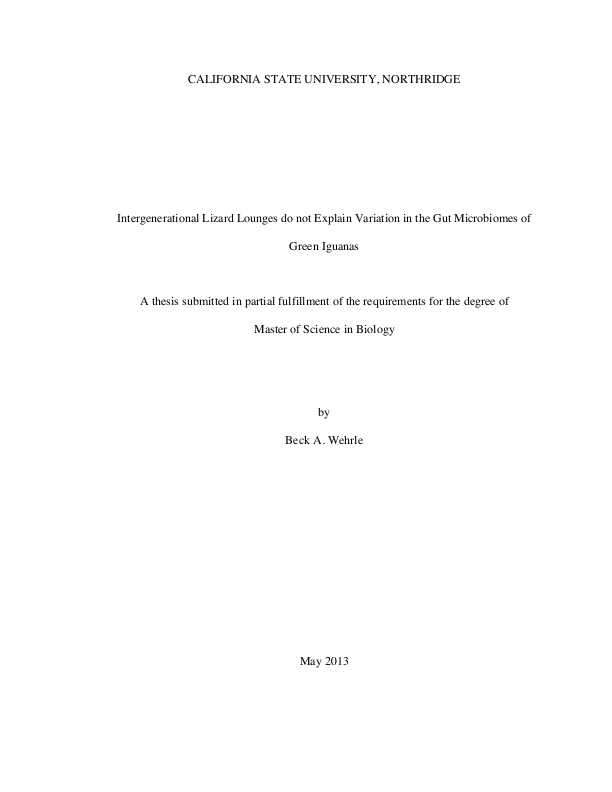 Herbivory is a rare diet specialization in lizards that requires numerous specializations including hindgut microsymbionts to aid in the digestion of plant meals. Researchers first attempted to identify the sources of the gut microbes hosted by herbivorous reptiles more than 30 years ago. These endosymbionts are needed to digest plant fiber and their fermentation products contribute substantially to their host's energy budget, yet this symbiosis is poorly understood. Green Iguanas (Iguana iguana) are herbivorous throughout life, yet emerge from their eggs with sterile guts. Although rare in lizards, social interactions are a hypothesized route of microbe transfer via direct contact and/or eating feces of older conspecifics or previously inoculated peers. This study is the first to characterize the spatial, temporal, and social variation of these vital microbial communities using modern genomic techniques. I hypothesized that microbial communities will be more similar within than between sites, increase in diversity over viii time, and vary with lounge size and proximity. I observed and individually marked juvenile, subadult, and adult iguanas alone and in social lounges at 11 sites on and around Barro Colorado Island, Panamá over two hatching seasons. Of the 540 focal observations of hatchlings, 38% were of social lounges (mean = 2.9 lizards/lounge). Only 0.7% of observations were of social lounges containing hatchlings and subadults/adults. I also collected microbe samples from the hindguts of adult and subadult iguanas to compare these communities to those from neonates that were sampled during the first 60 days posthatching. The16S rDNA region was amplified from 100 samples and highthroughput sequenced via the Illumina HiSeq platform. Using the QIIME workflow, OTUs were identified by sequences with ≥97% similarity and matched to lowest taxonomic level via the Greengenes database. Proportions of OTUs in each sample were calculated, as were Chao1 alpha diversity and Bray-Curtis beta diversity differences. The hindgut bacterial communities were dominated by Firmicutes (43%), Bacteroidetes (27%), and Proteobacteria (20%). I found differences in the abundances of bacterial taxa by iguana age class, lounge size, and site. Alpha diversity of microbes was higher in adults/subadults than hatchlings. There were significant differences in the beta diversity of samples by individual, age, site, lounge size, and year. I found high variation in microbial community composition overall and by each of these categories, including within recaptured individuals over time. Intergenerational microbial community transmission is unlikely to be as important as previously hypothesized. This finding is based on the near absence of intergenerational associations and the dissimilarity in microbial community assemblages between hatchlings and adults/subadults. However, ix within-hatchling microbial admixing was common, as evidenced by similarities in microbial community composition among hatchlings. Although microbial communities of iguanas differed among sites and lounge sizes, there were few clear patterns, with the exception that these differences likely resulted from ecological factors including microbial community succession within iguana guts. These findings lay the groundwork for understanding the patterns of gut microbial diversity in herbivorous lizards. Future research should focus on testing the role of soil on microbe acquisition, gene annotation of microbial communities to determine the OTUs contributing to digesting plant-fiber or acquiring nutrients, and to determine the effects of microbial community composition on aspects of host lizard biology.