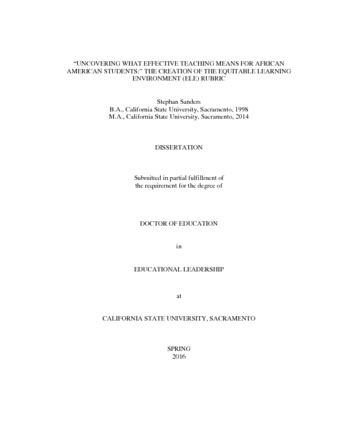 A macro-level solution to closing the Achievement Gap for African American students has evaded district administrators and state officials for decades. There have been new curriculums introduced, new educational settings such as charter schools developed, and a surplus of money injected into existing ineffective programs. The aforementioned endeavors have only produced short-term minimal gains for African American students and currently academic gains remain stagnant as the Achievement Gap has plateaued. Moreover, there has not been a large-scale initiative to equip teachers, the variables with the most influence on student gains, with more culturally relevant pedagogical skills with which to make African American students more successful. In addition, there has been a void in a teacher observation protocol tool from which teachers will have the impetus to enact strategies in the classroom that are the most efficacious for African American students. With Critical Race Theory and its tenets as the foundation in the rationalization for reforms in policy, teacher preparation programs, teaching practices, and teacher evaluation, this study introduces the Equitable Learning Environment (ELE) Theory and its progeny the ELE Rubric as a tool to inject Culturally Responsive Pedagogy (CRP) on a macro-level. This is a phenomenological study in which the researcher sought to uncover the shared essence that effective teachers of African American students encompassed. The findings serve to encapsulate the “essence” as a paradigm to which educational leaders can write policy and professional development curriculum around this contemporary shift in ideology, beliefs, and practice. The researcher created a rubric containing elements of both common Eurocentric pedagogy and CRP centered by the domains of 1) Emotional Support, 2) Classroom Continuity, and 3) Instructional Support, a five-week direct observation of five teachers in their own classrooms, followed by an interview with each, aided the researcher in defining the essence uncovered as a paradigm. The findings served to revise and perfect the ELE Rubric into a working tool that any elementary teacher could be trained to use, be evaluated on, and effectively serve all student populations in their classroom The following questions were answered in this study: (a) what measurable indicators of effective teaching and culturally responsive pedagogy do successful teachers of African American students in Grades K-5 employ in the classroom to make them academically successful? And (b) what do teachers believe a proposed teaching rubric used to asses both effective teaching and culturally responsive teaching techniques should encompass? The findings indicate that although Culturally Responsive Pedagogy covers a wide range of strategies, beliefs, and ideologies, there are seven measurable indicators effective teachers of African American students’ employ in the classroom. The findings also suggest the aforementioned significant seven measurable elements should be included on any teaching rubric or observation protocol if it is to be equitable for African American students. Although the study included a small number of participants, the methodology of completing multiple observations over several weeks, an interview with each participant, and the triangulation of the results within the review of literature give the findings a credibility anchored in quality of research. Upon completion of triangulation the seven major, measurable indicators found to be significant were (a) Creating connections to personal or cultural experiences; (b) Rigor, regardless of current academic levels; (c) Using literature in the classroom so students see themselves in the characters or their experiences played out in the literature; (d) Teachers must have a steadfast belief that African American students can achieve on grade level and beyond academically; (e) Teachers must master the skill of being a “warm demander,” being seen as someone students can trust but also firm in his or her expectations of students; (f) Teachers must create a connection with students’ families and learn important information about the communities in which they serve; and (g) Teachers must be intentional in creating relational trust with students before students will allow themselves to take risks and affirm the direct instruction of the teacher.