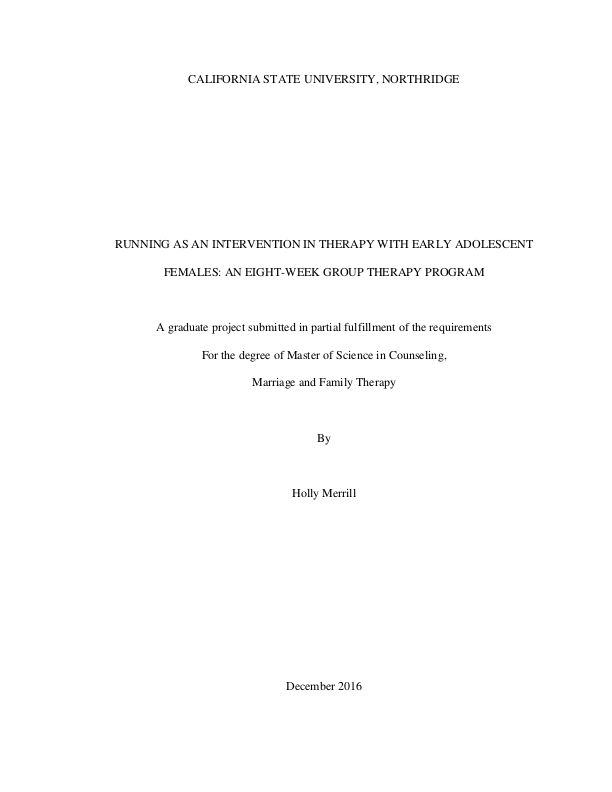 Running as an intervention in therapy with early adolescent females: an eight-week group therapy program

Abstract Running as an Intervention in Therapy with Early Adolescent Females: An Eight Week Group Therapy Program By Holly Merrill Master of Science in Counseling, Marriage and Family Therapy Many mental health disorders begin to appear in adolescence (Schwarz, 2009). Approximately 20% of adolescents in the United States have a diagnosable mental health disorder (Kessler, Berglund, Demler, Jin, & Walters, 2005). During puberty females face numerous changes which include: changes in appearance, fluctuation of hormones, and behavioral changes (Caskey, 2014). Adolescence is a monumental stage in life and many adolescents may need support during this time to help them work through their stressors. Research provides evidence that running can help improve mental health and alleviate stressors. Unfortunately, over the past decade, there has been in increase in sedentary lifestyles which has led to lower states of health and well-being in Americans (Ruby, Dunn, Perrino, Gillis, & Viel, 2011). According to the Centers for Disease vii Control and Prevention [CDC] (2015) only 24.8% of adolescent Americans get the recommended amount of physical activity per week. This project provides an eight-week group therapy guidebook for mental health practitioners to use when providing group therapy to early adolescent females. Each week is provided with goals, interventions, and process questions. This project follows solution-based theory, and incorporates running as an intervention to help improve physical health, mental health, resilience, and overall well-being in early adolescent females.