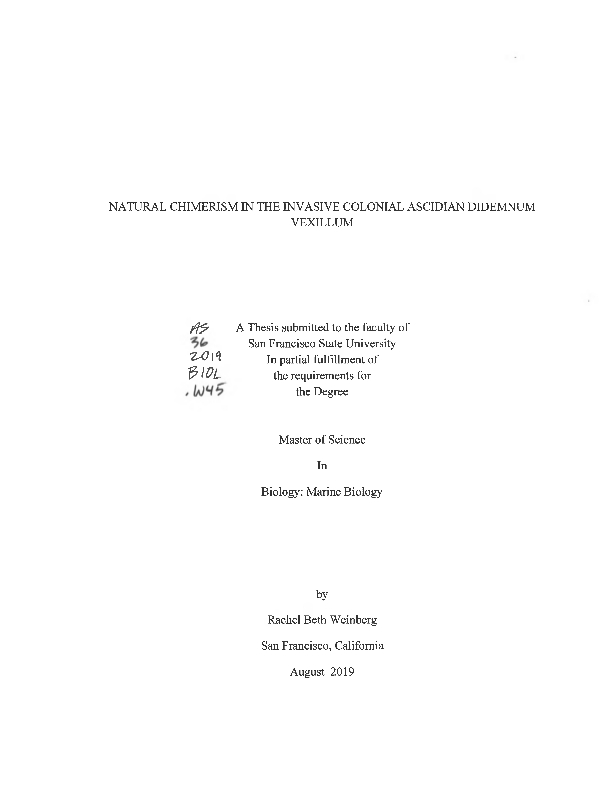 Colonial, asexually reproducing organisms are typically treated as genetically homogenous entities composed of clonal units. However, processes such as fusion and somatic mutation may lead to the integration of multiple genetic lines in a single physiologically continuous organism. This state, known as chimerism, has been documented in a broad range of sessile modular taxa, including plants, fungi, slime molds, and colonial metazoans such as ascidians. In the invasive colonial ascidian Didemnum vexillum, naturally occurring chimerism has been documented from the presence of more than two alleles at microsatellite loci, however factors such as homozygosity and spatial separation of genets within a colony may mask chimerism using this detection method alone. In order to more accurately quantify the prevalence of chimerism in introduced D. vexillum populations, zooids were dissected from 35 colonies and individually genotyped. Both spatial and molecular masking of chimerism was found in a proportion of the chimeric colonies, indicating that the sampling strategy applied here has the potential to identify chimerism in D. vexillum colonies that appear monogeneic from single tissue samples. In Umpqua, Oregon, 70% of the colonies sampled were chimeric, which is the highest prevalence of chimerism reported in any D. vexillum population studied to date. In Half Moon Bay, 30% of the samples were chimeric, which is similar to the rates of chimerism previously estimated in this population using single tissue samples. The significant differences in chimerism between the two populations were not associated with significant differences in genetic diversity or inbreeding, as measured by expected and observed heterozygosity. Relatedness was significantly higher among genets within chimeric colonies than across genets in the population as a whole, providing evidence from two natural populations that chimerism in D. vexillum is genetically mediated. These results show that there may be extreme variation in chimerism prevalence across populations, providing a basis for future studies to investigate the causes of this variation and its potential role in facilitating the successful establishment of non-native species.