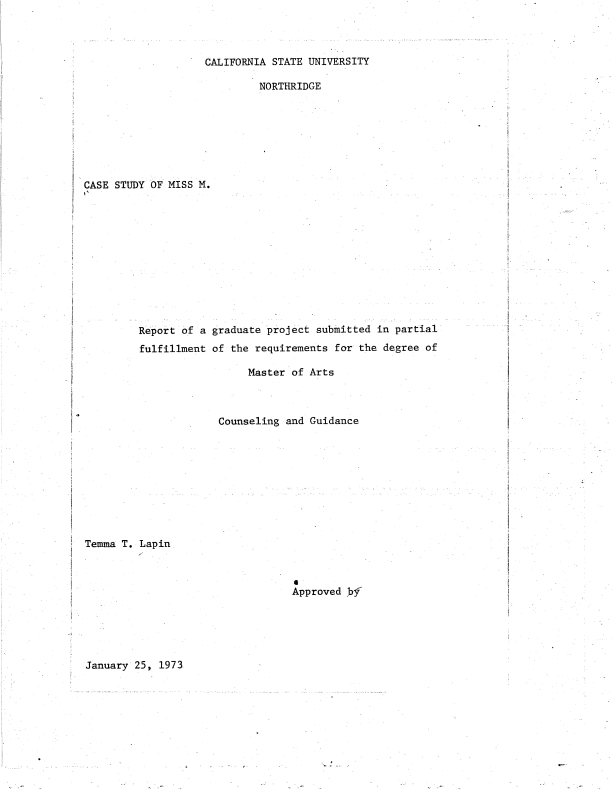 The following case study was conducted under the direct supervision of Ida Watkins Klinger, M.S.W. and licensed Marriage and Family Counselor, Dr. J. Harry Klinger, physician and pathologist, and Dr. Marvin Eisenberg, psychiatrist. The therapy sessions took place at the Valley Psychiatric Medical Clinic located at 3959 Laurel Canyon Boulevard, Studio City, California. The theoretical basis from which I have worked in these therapy sessions is eclectic, with the main emphasis placed on theories of Freud, Jung, and the concepts of Transactional Analysis. Presenting Problem: Miss M. came to therapy because she was having difficulties with her boyfriend, Rick. She was displeased that her boyfriend was not interested in marriage at the moment. He kept telling her, ''Maybe sometime in the future", but not now would he make a commitment. Her dissatisfaction was that she could not get her boyfriend to commit himself to her, and she did not understand why. History: Miss M. is twenty-seven years old. She is the eldest of two children, her brother being three years younger than she. Miss M. now resides in Brentwood, California, and has been living there for a little over a year. Miss M. was born in New York. At the age of seven her family moved to Tucson, and later, at the age of eleven the family moved to El Paso. Miss M. remained in El Paso until she was eighteen. It was at this time that her parents separated and she went to live with her mother in New York. When she started college, Miss M. returned to El Paso to live with her father, then moved to Tucson, where she maintained her own apartment while attending the University of Arizona, in Tucson. It was there that she was raped at the point of a knife and returned immediately to El Paso. After finishing college Miss M. returned to New York to live with her mother. She taught school in New York for a short time until her mother's death. Immediately thereafter Miss M. returned to El Paso, and after a brief stay, left to look for employment and a home in Los Angeles. (See more in text.)