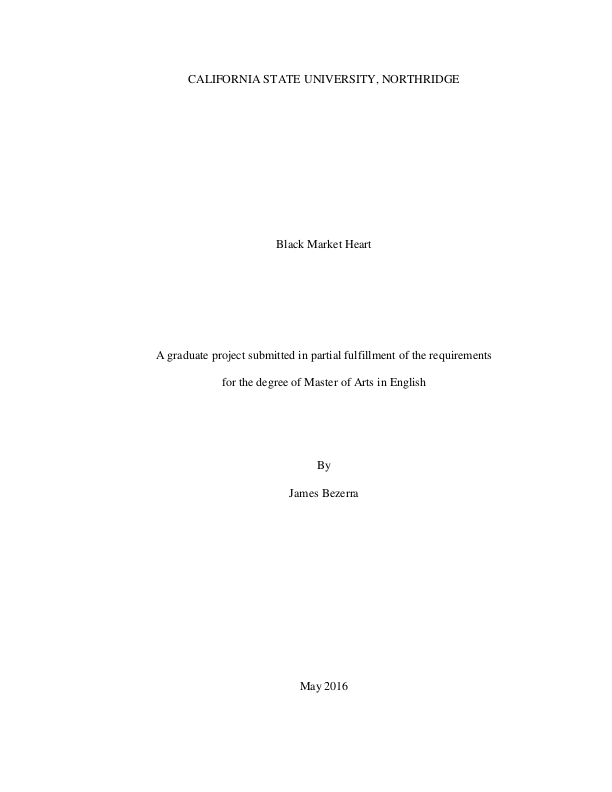 Black Market Heart is a collection of writing. It includes fiction, non-fiction, flash fiction, plays, poems, and some stuff that isn't any of that. It is the sort of bizarre and anarchic collection of writing that I have always wanted to produce, but which I likely would not have been allowed to compile outside the sheltered harbor of a writing program. It represents where I have been as a writer and where I am now. My hope is that it also indicates the breadth of my interest and ability as someone who writes words. I have designed this collection as a kind of calling card. My goal is that as a body of work it demonstrates both who I am and how I write. I used Aimee Bender's collection The Girl in the Flammable Skirt as my model and spirit guide. To read Flammable Skirt is to know Bender as an author and to be immersed in the written world she creates for herself. It is my hope that Black Market Heart does something similar for me. This collection includes (but is not limited to): an entirely subjective history of Los Angeles, a story about a duck from outer space, a one-act play about aging punk rockers, an open letter to Gertrude Stein, some completely true information about frogs, a little bit of time travel, a narrative-less story told entirely in documents, an unperformable one-act play wherein the only actor is a monkey, postcards, pirates, Jacques Derrida, and a non-linear love story about organ theft. If none of that sounds terribly interesting to you, there are also some mimes. This collection is also a kind of love note to the written word. I still believe in stories and contend that storytelling is not exhausted simply because some of us have grown cynical or antiseptic about it. I find joy in the interplay of stories and ideas, of form and content. I think often on Italo Calvino's dictums about lightness and swiftness. I think an attentive reader might hear in this collection distant echoes of Charlie Kaufman and Aaron Sorkin, of Lydia Davis and Grace Paley, of Beck and Bukowski, of Steve Erickson and Judith Schalansky (That - by the way - is the guest list for an after party that would certainly end badly, but fabulously so). This collection is also a kind of declaration; a manifesto in advocacy of the frenetic, wanderlusty joy of writing. The relationship of a writer to her text need not be a murder-suicide pact nor a drowning in the shallow bathtub water of Critical Theory. There be monsters out there beyond the margins of our pages - like the empty edges of an incomplete map - and only those among us with an adventurous hope in our hearts will ever survive the shipwrecks, mutinies, earthquakes, and conflagrations (to paraphrase Bertrand Russell) necessary to find them and name them. Writing is exploration. Black Market Heart is a kind of exploration. A kind of love note, a kind of manifesto, a kind of calling card. If none of that sounds terribly interesting to you, then there are always the mimes.