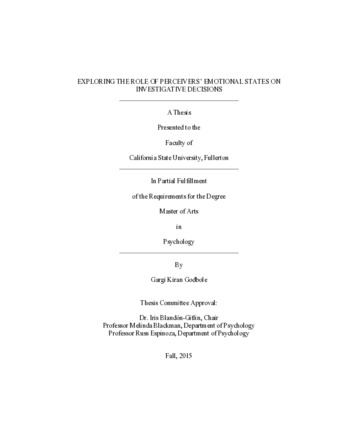 Exploring the Role of Perceivers' Emotional States on Investigative Decisions.

This study explored the effects of interviewers’ emotions in a mock interrogation context. Prior research reveals that emotional states can either hinder or improve information processing and decision-making. For example, studies show that a sad, but not a happy, state leads to better lie detection accuracy (Ask & Granhag, 2007; Semmler & Brewer, 2002). Other research shows that a sad, but not an angry, state leads to careful processing of criminal scenarios (Tiedens & Linton, 2001). Emotion models suggest that happy and angry moods induce perceivers to a shallow-based, heuristics processing style, whereas sad moods lead to a deep, systematic-based processing style. Thus, it can be predicted that sad moods will have a more focused approach in interrogating suspects, while angry and happy emotions will lead to having a more dispersed choosing style. In this study, we examined angry, happy, sad, and neutral emotional states on mock interrogators’ decisions about the use of high- versus low-coercive interrogation tactics. Participant read a crime scenario where they imagined being an interrogator. Next, they were told to visualize and write an autobiographical event to induce one of the four emotional states – angry, happy, sad, or neutral. They then rated two broad categories of tactics – lowpressure tactics (e.g., “reduce fears”) and high-pressure tactics (e.g., “identify and exaggerate fears”) – on the extent to which they would use them to interview the suspect in the scenario. It was hypothesized that sad, but not angry or happy, participants would select less coercive tactics to interview the potential suspect. The results did not confirm the main hypothesis; although emotions were induced, they did not have an effect on selecting tactics. All participants across emotion conditions significantly selected the low-pressure tactics as a way to interrogate the potential suspect. One reason this may have happened is that the choice of low-pressure tactics could have been seen a more socially desirable response for the college student participants in this study. The limitations in this study and future research will be discussed.