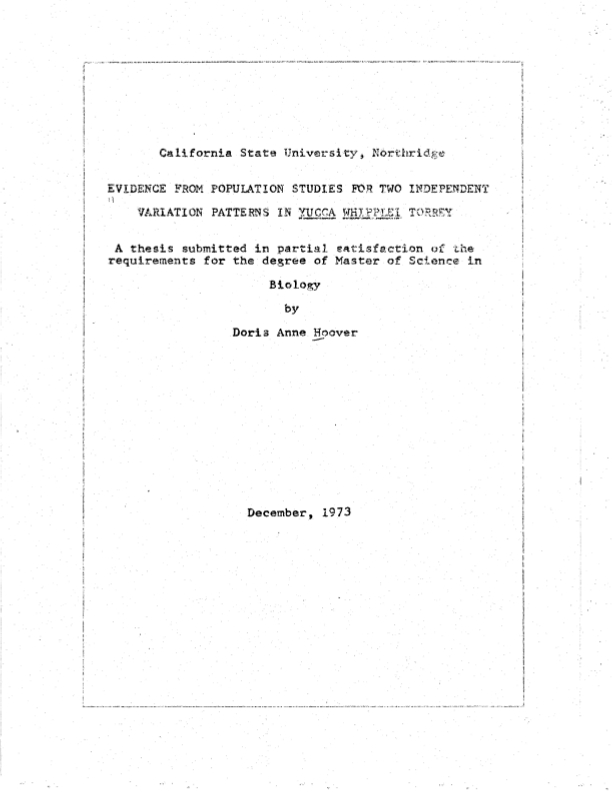 Analysis of data from population studies made throughout the range of Yucca whipplei Torrey in California reveals two distinct, independently selected variation patterns. Pattern 1. Plant Habit. The distribution of plant habit in populations is correlated with climatic severity and apparently results from selection for or against the seedling progeny. Four kinds of populations are differentiated on the basis of habit and the climates in which they are found. These are: Rhizomatous (maritime), Mixed-Habit (transitional), Monocarpic (mild, mesic) and Caespitose (severe, continental). Pattern 2. Plant Morphology. On the basis of leaf morphology and other vegetative characters, the populations of Y whipplei fall into four groups (here called Series), all of which are independent of habit differences. Series 1 consists of populations with yellowish green, long, narrow, thin, flexible leaves (subspecies intermedia Haines and subspecies typica Haines). The leaves of populations in Series 2A are long, wide, thin, flexible and blue-green in color (subspecies Parishii/Jones/Haines and part of subspecies percursa Haines). Populations of Series 2B have short, thick, stiff , narrow, blue-green leaves (Subspecies caespitosa, Jones/Haines and part of ssp. percursa).Series 3 includes al1 populations of intermediate foliage characteristics that have apparently resulted from hybridization between populations belonging to two or more different Series (Series 3 consists of large populations of ssp. caesptitosa,, ssp. intermedia and ssp. percursa. Since all four climate-associated habit types constitute sizeable populations in each Series, they form clinically varying ecotypes of three ecospecies (Series 1, 2A and 2B). Somewhat restricted fertility in populations of Series 3 (hybrid) is found in the field, indicating that the parental races, ancestral to the ecospecies I recognize, ultimately developed genetic barriers. Therefore the Yucca whipplei complex; being itself somewhat isolated from other Yucca species by their different sets of pollinator moths, constitutes a cenospecies.