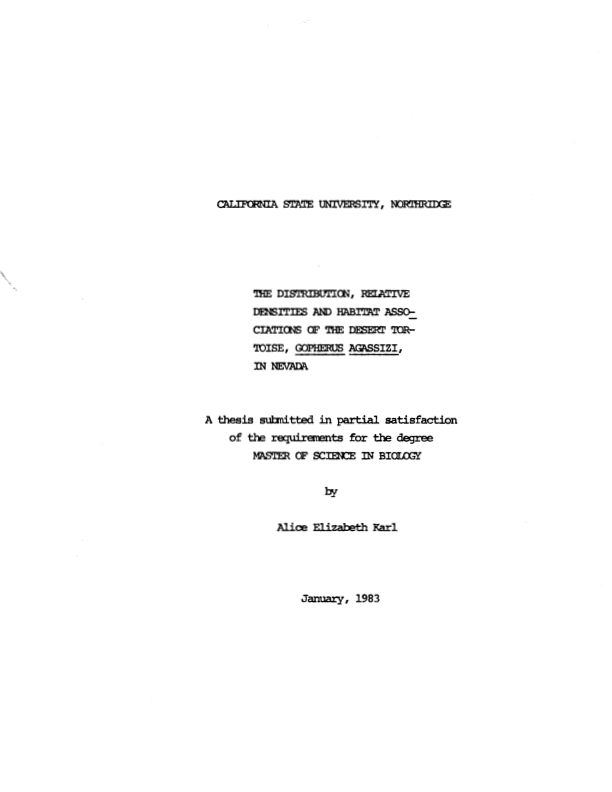 The distribution, relative densities and habitat associations of the desert tortoise, Gopherus agassizi, in Nevada

To determine the distribution, relative densities and habitat associations of Gopherus agassizi in Nevada, a 5500 square mile study area was surveyed using 312 strip transects. Evidence of tortoises was found to the eastern, western, and southern boundaries of the state and nearly as far north as Leith (T8S) in Lincoln County and Beatty (Tl2S) in Nye County. Although other studies have suggested that tortoises range as far north as Tl2S in Nye County and T7S in Lincoln County, the vegetation associated with these northern sites is unlikely to represent tortoise habitat. Over 90 percent of the surveyed area (approximately 5000 mi2) was estimated to have densities less than 50 tortoises/mi2; this density has been previously suggested to represent the lower critical level for survival. Ten areas are estimated to have densities exceeding fifty tortoises/mi2 : Coyote Springs Valley, Hidden Valley, Dry Lake Valley, Moapa Valley, the Virgin Mountains, Eldorado Valley, Piute Valley, Goodsprings Valley, Arden, and Pahrump. The viability of the tortoise in Nevada is discussed with respect to population densities, natality rate, mortality rate, amount of available habitable land, and degrees of disturbance. It is suggested that only the Virgin Mountains, Piute Valley, Eldorado Valley, Moapa Valley, Coyote Springs Valley, and Hidden Valley populations may be viable as a result of environmental constraints and current size. Evidence of tortoises was found primarily in the Larrea tridentata community (94.7 percent of 171 transects where tortoise presence was positively identified). Tortoise evidence was also found in the L. tridentata-Coleogyne ramosissima ecotone and the C. ramosissima community. However, there was a significant negative correlation between estimated tortoise density and the dominance of c. ramosissima in the shrub layer, probably as a result of either climatic constraints associated with c. ramosissima or associated Bromus rubens. A significant negative correlation also existed between estimated tortoise densities and the domiriance of B. rubens in the understory. No evidence of tortoises was found in the Pinus monophylla-Juniperus community. Tortoise sign was found on slopes with steepnesses up to 60 percent; however, estimated tortoise densities were lower than expected on mountain slopes, using a x2analysis. Elevations between 1320 and 4560 feet showed evidence of tortoise habitation; the data were inconclusive in establishing an elevational limit, although 4000 feet is suggested. Difficulties encountered in employing the transect method for determining tortoise densities are discussed. It is determined that the method is appropriate for estimating regional densities and thereby identifying critical areas to be more closely investigated during land usage decisions.