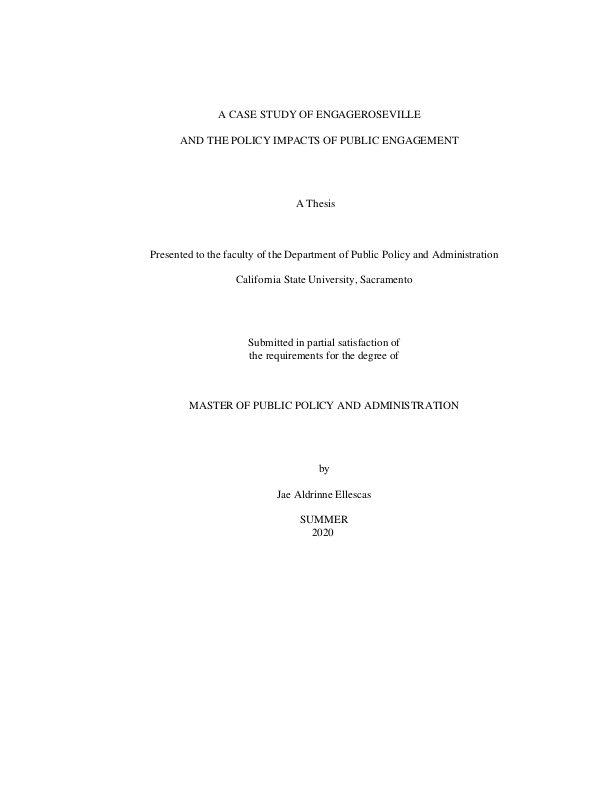 After the Great Recession, local governments were confronting years of slowing revenue growth and increasing expenditures. The City of Roseville was not immune to these budget deficits: growing operational and long-term costs compounded by declining tax revenue meant that the city was facing deep cuts to its public-facing services. When faced with such an immediate and politically contentious problem, city staff turned to public engagement to educate residents about the issue and to generate multiple pathways for members of the public to voice their opinions to decision-makers. Research shows such a process can increase civic-mindedness and trust if it meets certain standards. In my case study of EngageRoseville, I compared Roseville’s outreach efforts against the TIERS Public Engagement Framework. Developed by the Institute for Local Government, the Framework outlines five pillars of effective community engagement: Think, Initiate, Engage, Review, and Shift. I used publicly available records, such as committee reports, recorded public meetings, podcasts, and survey data results to review the various strategies that Roseville deployed. I also relied on interviews with city leaders to obtain valuable perspective from the people who designed and implemented EngageRoseville. I found that EngageRoseville adhered fairly closely to the Framework’s five pillars. City staff had a clear goal and a set of guiding principles that became the basis of every activity throughout the engagement process. They disseminated simple and informative messages to all of the city’s residents and focused on breadth of coverage by creating multiple platforms through which the public could provide input—including public meetings, short surveys, and gamification of the budget. As a result, EngageRoseville saw a high rate of participation, particularly in its online activities. Feedback from the community empowered the City Council to place a half-cent sales tax increase on the 2018 ballot. In the end, the city’s nearly year-long effort to educate residents and generate public trust paid dividends when Measure B passed with over 60 percent of the vote. Today, the results of EngageRoseville are still felt, as city leaders continue to use the information it gathered to make budgeting decisions and to reach out to the public. EngageRoseville’s success is a testament to the impact that effective public engagement can have on public policy.