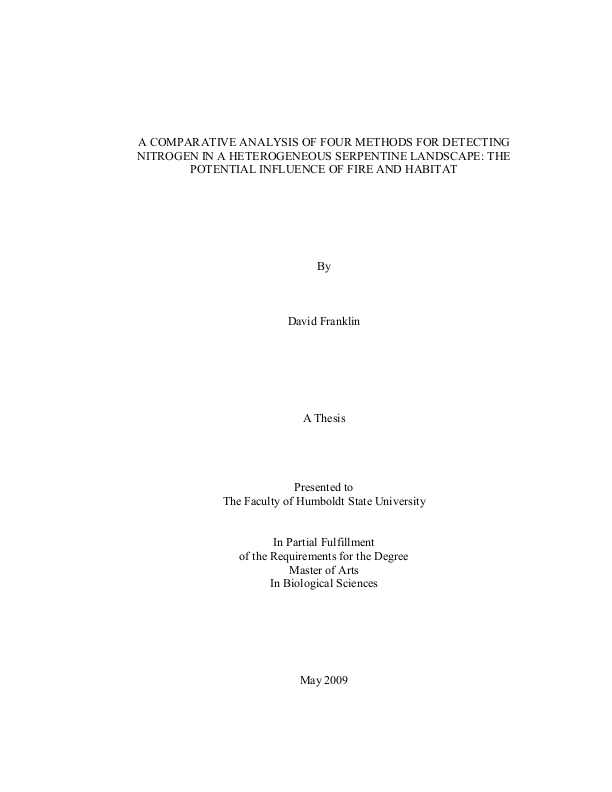 A comparative analysis of four methods for detecting nitrogen in a heterogeneous serpentine landscape: the potential influence of fire and habitat

Ultramafic parent materials in northern California and southwestern Oregon have given rise to one of the largest serpentine regions in the world. This area is dominated by sparse, fire-prone coniferous forests and shrublands which are apparently highly nutrient limited. Fire is the primary disturbance in these unique ecosystems, yet little is known about how fire influences soil nutrient dynamics. I utilized the large, ~202,000 ha Biscuit Fire of 2002 to compare nitrogen levels in burned versus unburned serpentine sites. A variety of methods are used to quantify nitrogen and nitrogen transformations in the field. Methods comparisons, however, are generally compared in a laboratory setting and rarely in the field. I compared three commonly used methods, plus a novel approach, to assess the effect of fire on two different habitats within a nutrient-poor serpentine landscape. I used soil sampling, ion exchange resin bags, and a hybrid soil sampling/resin bag method to compare burned and unburned areas five years after the fire. Nitrogen was quantified in both wetland and upland habitats, as these were expected to be affected differently by fire. No effect of the fire was detected in wetland habitats using any method, yet estimates of ambient levels of nitrogen varied among methods. There was, however, a mixed signal in the upland areas; the ion exchange resin bags identified a significantly more nitrogen in unburned plots, while soil sampling detected no such difference. Additionally, no difference in soil nitrogen was detected between wetland and upland areas. My study demonstrates that conclusions about the role of fire on nitrogen dynamics can be strongly influenced by the methods of nitrogen detection used. Unlike comparisons carried out under controlled laboratory conditions, my work does not establish whether one method is better than another, only that it is possible to reach different conclusions depending which method one uses. Lastly, due to a lack of pre-burn data, as well as the five year time lag between the fire and sampling, and inconsistent estimates of soil nitrogen availability by various methods, my study does not provide firm conclusions about how fire affects nitrogen in serpentine habitats. To my knowledge, my study represents the first assessment of fire on soil nitrogen, as well as the first comparison between wetlands and uplands in serpentine habitats of northern California and Oregon. More research is needed to determine the effects of fire on soil nitrogen, and refinements need to be made to methodologies for quantifying nitrogen in these habitats. I discuss future research directions that could help elucidate the role of fire on nitrogen dynamics on serpentine soils as well as possible avenues for refining the methodologies for quantifying nitrogen.