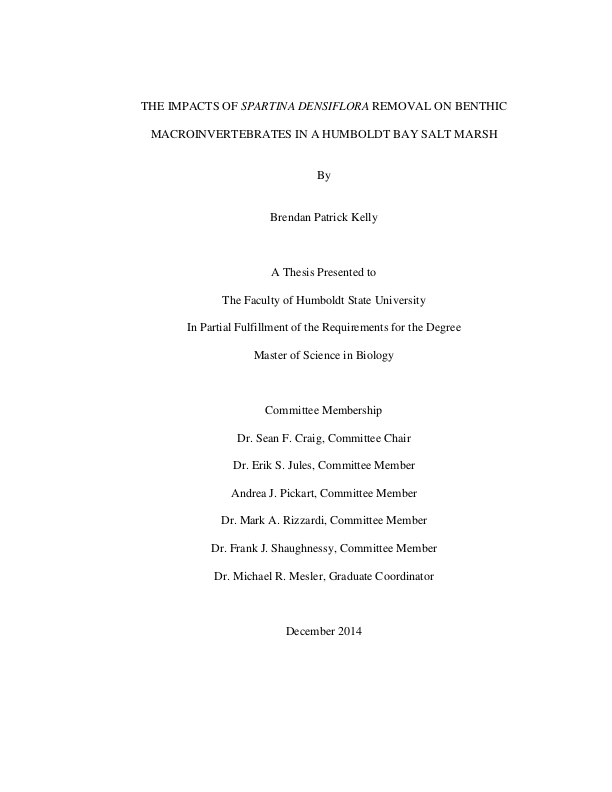 Spartina densiflora, a non-indigenous, invasive, perennial cordgrass has colonized and modified roughly 90% of the remaining salt marsh habitat in Humboldt Bay, California. As part of a region wide effort to ameliorate the effects of this invasion, two mechanical methods were used to remove Spartina densiflora from these marshes: (1) a “light grind” treatment in which a metal-bladed brushcutter was used to cut approximately 8 cm into the mud to remove S.densiflora, and (2) a 13-15 cm “deep grind” treatment used to grind up S. densiflora’s rhizomes further down in the mud. This study was designed to assess the benthic macroinvertebrate response to S. densiflora removal by comparing their abundance, diversity, and community composition across these two removal treatments over a 13 month time period. Samples were collected before S. densiflora removal in spring 2011, and after removal at two time points: (1) in fall 2011 and (2) spring 2012. Invertebrates in the families: Tubificidae, Corophiidae, Enchytraeidae, and Ceratopogonidae were the most highly represented of the twenty invertebrate families documented in this study (n = 660, 490, 129, and 115 total counts respectively). Nonmetric multidimensional scaling (NMDS) indicated that tubificid oligochaetes were positively associated with sites in which S. densiflora had been eradicated, while corophiids were more abundant in sites that contained S. densiflora. Ceratopogonid larvae were associated with pre-removal sites, while enchytraeid abundance was variable across treatments. Univariate comparisons substantiated the results of the NMDS; tubificid abundance was higher in removal sites, corophiid abundance was greater in controls and pre-removal sites, while ceratopogonids were most abundant before removal, in the spring of 2011. Multiple Response Permutation Procedures (MRPP) and analyses of Shannon-Wiener diversity (H) indicated that invertebrate community composition was significantly altered and less diverse in removal sites, relative to sites containing S. densiflora. The results of this study suggest that S. densiflora removal is associated with a short-term reduction in diversity, and a shift in benthic macrofaunal community structure from one dominated by surface microalgae consuming corophiids, to one consisting mostly of subsurface detritivores in the family Tubificidae.