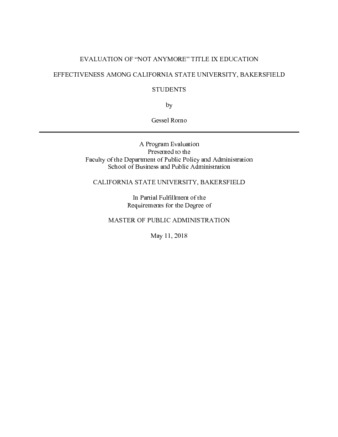 The purpose of this study is to evaluate the Title IX “Not Anymore” training’s effectiveness among students at the main CSU Bakersfield campus and see if there are any cultural, sex, age, or student status differences among the responses. “Not Anymore” is an interactive online sexual assault prevention and education program that also depicts true student accounts of their cases. The educational Title IX video series “Not Anymore,” is mandated by the federal government and CSU Chancellor and its evaluation will provide clarification on inconsistencies found in existing literature and CSUB reports. Federally funded schools, universities, and colleges are legally required to provide a safe-learning climate for their students, free of discrimination and harassment. Discrimination is defined as an adverse action taken against an individual based on race, gender, religion, or sex/sexual identity (Ali, 2011). These protective policies, especially those regarding sexual discrimination, are described and detailed in the Title IX legislation. CSUB defines the policy on their Title IX webpage as form of protection for “all people regardless of their gender or gender identity from sex discrimination, which includes sexual harassment and violence” (“What is Title IX,” 2018). Interestingly, data collected and organized from the CSUs’ Annual Security Reports in 2017 and the CSUB Title IX report (e.g. Catota, 2017) showed that universities with similar demographics as CSUB, had an average of 67 cases filed from 2014-2016, while CSUB reported only five cases for that same term. Survey results showed many significant differences between male and female, Latino and Non-Latino/White students, and older students, though the strength of these correlations is low, the findings aligned with the literature. Overall, students agreed that the campus felt safe and is doing an adequate job in educating them about Title IX, thus, supporting the lower than average cases reflected in the reports.