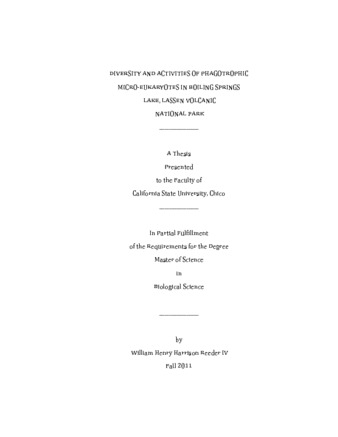 ABSTRACT DIVERSITY AND ACTIVITIES OF PHAGOTROPHIC MICRO-EUKARYOTES IN BOILING SPRINGS LAKE, LASSEN VOLCANIC NATIONAL PARK by William Henry Harrison Reeder IV Master of Science in Biological Science California State University, Chico Fall 2011 The biology of extreme environments has focused on diversity and adaptations, largely concentrating on the prokaryotic community. Only recently have investigations targeted eukaryotic diversity in extreme environments, and few studies have examined food web interactions. In this thesis, I studied the protist grazing component of the Boiling Springs Lake (BSL) food web. Boiling Springs Lake is a flooded fumarole that contains a 1.8 ha pool of pH 2.2, 52°C water in California’s Lassen Volcanic National Park. It is an NSF-funded Microbial Observatory focused on understanding the diversity and interactions of the entire microbial community. Using a combination of culture and genetic approaches, I found the major predator in BSL to be a unique vahlkampfiid amoeba capable of surviving the physical extremes of BSL. It is closely related via rRNA sequence to Tetramitus thermacidophilus, a heterolobose amoeboflagellate recently isolated from volcanic geothermal acidic sites in Europe and Russia, and an uncultured heterolobosean amoebae from the nearby Iron Mountain Mine acid mine drainage site. Transects studies showed the organism is endemic to the lake, and cysts were present at an average of ~500 viable cells mg-1 on the shoreline. The amoeba form is active up to 52 C, is a strict acidophile, and was observed grazing on native ascomycete Phialophora sp., as well as bacteria such as Micrococcus sp. Other grazing protists were identified in lakeshore environments, but were unable to grow in the extreme conditions of the lake. These include the lobose amoebae Hartmannella sp. and Acanthamoeba sp., and the kinetoplastid flagellate Bodo sp. Acanthamoeba and Bodo were acid tolerant, but could not grow at temperatures above 30C, while Hartmentalla was thermotolerant but could not grow at low pH. Microscopic analysis showed the presence of a variety of other morphotypes that I tentatively identified as ciliates, euglenids, cercozoans, and various flagellates from colder areas around the lake. However, I was not able to culture these, and no genetic identification was obtained. Additionally, I observed apparent large DNA viruses in Acanthamoeba sp. cultures, which resembled Mimivirus. While still tentative, this is possibly the first observation of a eukaryotic virus from an acidothermal environment.