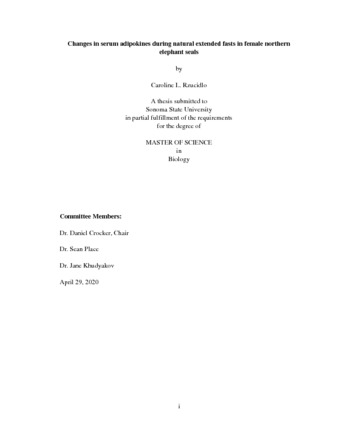 Purpose of the study: Adipose tissue is essential to endotherms for thermal regulation and energy storage as well as functioning as an endocrine organ. Adipose derived hormones, or adipokines, regulate metabolism, energy expenditure, reproduction, and immune function in model systems but are less well studied in wildlife. Female northern elephant seals (NES) achieve high adiposity during foraging and then undergo natural prolonged fasts while breeding, lactating, and molting, resulting in large changes in adipose reserves. Procedure: We measured circulating levels of four adipokines, leptin, resistin, adiponectin, and kisspeptin-54, in 196 serum samples from female NES at the beginning and end of their breeding and molting fasts. We examined the relationships between these adipokines and life history stage, adiposity, mass, cortisol, and the immune cytokine interleukin 6 (IL-6). Findings: All four adipokines varied with life history stage. Leptin concentrations were highest during the beginning of the breeding haul-out and resistin concentrations were higher throughout the breeding haul-out compared to the molt haul-out. Adiponectin was highest during the beginning of both haul-outs and kisspeptin-54 concentrations were highest during the end of the breeding haul-out. Leptin, resistin, and adiponectin were associated with measures of body condition, either adiposity, mass, or both. Resistin, adiponectin, and kisspeptin-54 were associated with circulating cortisol concentrations. Resistin was strongly associated with circulating IL-6, a multifunctional cytokine associated with the innate immune response. Adiponectin was associated with glucose concentrations and may be a driver of tissue-specific insulin sensitivity during life history stages categorized by high adiposity. Increased cortisol concentrations late in lactation were associated with increased kisspeptin-54 which may play a role in initiation ovulation in NES. Conclusions: This study suggests dramatic changes in circulating adipokines with life history and body condition that may exert important regulatory roles in NES. Differences from biomedical model systems suggest the potential for modifications of expression and function of adipose-derived hormones in species that undergo natural changes in adiposity as part of their life-history.