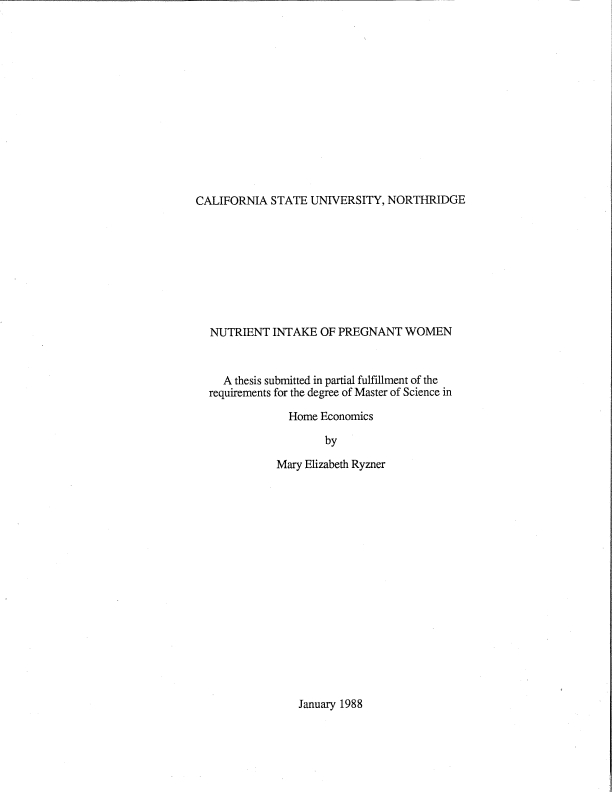 The dietary intakes of 54 pregnant women, aged 20-37 years, who were attending prenatal classes in the Santa Barbara, California, area, were compared to the 1980 Recommended Dietary Allowances (RDA) for nutritional adequacy by use of a nutrition questionnaire and three-day food intake record. Also, an attempt was made to identify any differences regarding nutritional intake versus age, family income, occupation, schooling, number of other children, stage of pregnancy, eating habits, and nutrition information received. Calories, protein, folic acid, vitamin B6, iron, and zinc were selected for evaluation since the maternal diet is often deficient in one or more of these nutrients. The number of subjects who consumed less than two-thirds of the RDA was greater than 20 percent for folic acid, vitamin B6, iron, and zinc. Mean intakes for protein and calcium exceeded the RDA. There were significant differences in the mean intakes of these nutrients, except for protein, compared with the RDA No significant differences were found in the consumption of calories and the six nutrients in relation to income, occupation, stage of pregnancy, appetite, and sources of nutrition information received. Women in the 30-39 year age group had significantly higher folic acid and iron intakes than the women in the 20-29 year group. Those with some college or technical training had significantly higher zinc intakes than those with high school, college or post-graduate training. When three meals were consumed daily, intakes of calories, protein, and folic acid were significantly higher than when one meal was skipped.