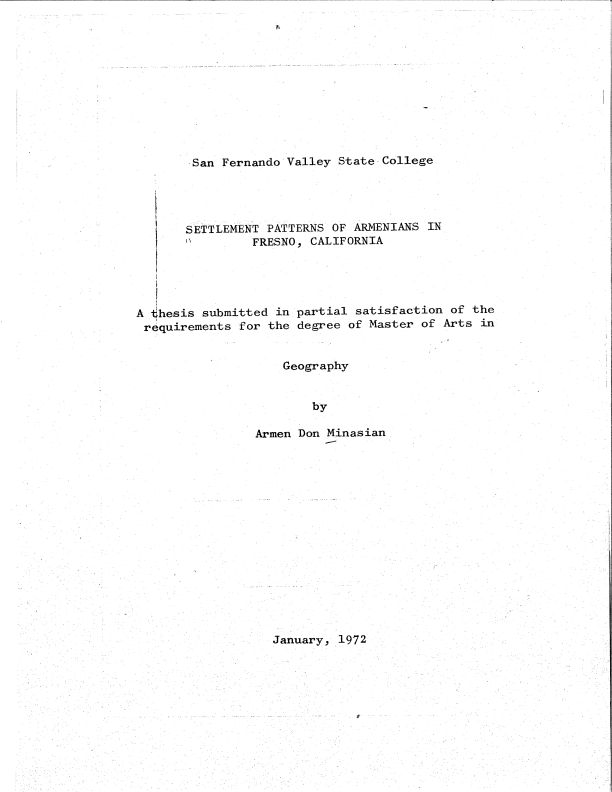 An ancient people, Armenians have lived in the general area that is now eastern Turkey and northern Iraq for nearly three thousand years. With their acceptance of Christianity in the fourth century, and more importantly their subsequent religious isolation from other Christian sects, Armenians developed a separate and unique culture. Due to the Turkish policy of genocide against Armenians in the later part of the nineteenth and early twentieth centuries, Armenians bade farewell to their homeland in large numbers. American missionaries had gone to Turkey in 1831, and from these evangelists Armenians had learned of America. It was to escape the despotism of the Ottomans, attendant with the knowledge of a better life in America, that Armenians migrated to America. In America two large Armenian colonies developed, the largest one in New England around Boston, and the other colony in the San Joaquin Valley centered on Fresno, California. Armenian settlement in Fresno began in 1881, and by 1920 there were nearly five thousand Armenians living there. Armenians immediately clustered together in an enclave which was located in the blighted residential areas of the c1ty. The institution of the family and the role of the Armenian Churches were two salient forces accounting for their clustered pattern of settlement. The cohesive effect of these two institutions were reinforced appreciably by the prejudice and general suspicion against the Armenians almost immediately encountered upon their arrival to the area. The prejudice against the ethnip group had a spatial character to it, in the numerous restrictive covenants which legally prevented Armenians from living in many localities in Fresno. Hence, the family, the church, and the prejudice against Armenians all helped to shape early Armenian settlement patterns in Fresno. Second-generation Armenians were faced with the transition from an old culture to a new culture, and to many of them Old World values held little value in the American environment. The dispersal of Armenians away from the enclave in the 1940 1s was, in part, by the second generation. This trend away from the ethnic enclave became significant during the 1950's, in part due to the outlawing of the restrictive racial covenant as a legal tool for segregation in America. This suburbanization of Armenians in Fresno continued unabated, and by 1960 over one-half of the ethnic group no longer resided in a compact enclave, and many were scattered among the city's general population. Because of the desire to find better housing and an equal, if not stronger desire to escape the progressive encroachment of blacks and Mexicans in Fresno, it is postulated that the trend towards suburbanization among Armenians should continue in the future.